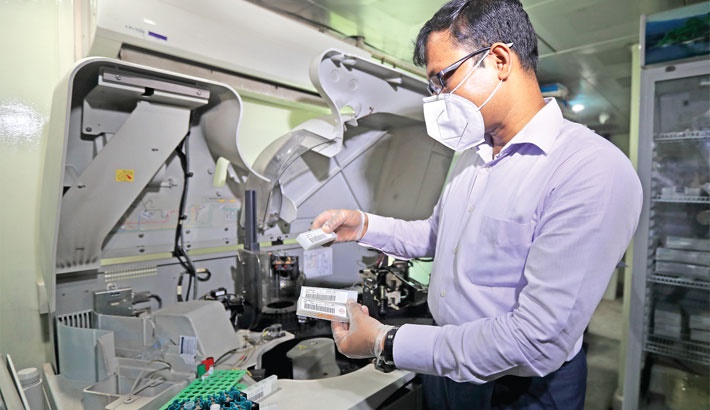 Despite a massive crackdown, many private hospitals and diagnostic centres in the country are still involved in various irregularities, including providing of fake tests.

Such the irregularities were unearthed on Tuesday when law enforcers carried out raids on a hospital and a diagnostic centre in the capital.

An RAB team conducted the drives on information that they provide fake test reports and keep date-expired treatment materials. The medical establishments were also sealed off and fined Tk 5 million.

In recent times, such irregularities in hospitals have also been discovered during the magistrate-led operations.

Owners and executives of some irregularities-ridden hospitals and clinics, including Shahed Karim of Regent Hospital and Sabrina of JKG healthcare, have recently been rounded up and landed in jail for various misdeeds.

A mobile court of the RAB, led by Executive Magistrate Sarwar Alam, raided the hospitals and fined the money.

“It is a medical college, but it has no microbiological department. The reports in the lab seemed o be fake.”

“Two units must not have at a floor. We fined the hospital authorities Tk 3 million for the irregularities,” he said.

If the rules for conducing Covid-19 unit are not maintained properly, the unit may be stopped, he added.

Earlier on July 19, a team of the RAB found expired medicines (11 years old) during a raid on Shahabuddin Medical College Hospital at Gulshan in the capital.

The raid was carried out primarily over irregularities in Covid-19 testing, The elite force has also detained two people, including an assistant director of the hospital.

The hospital was reportedly testing Covid-19 samples with rapid test kits which, according to the Directorate General of Drug Administration, cannot be used for diagnosis.

On July 8, the Mirpur branch of Regent Hospital was sealed off by Rab on charges of its management issuing fake Covid-19 test certificates and charging money to treat coronavirus patients despite agreeing to do it for free.

A mobile court of Rab led by Executive Magistrate Sarwoer Alam conducted the drive and sealed off the hospital.

The move came a day after the head office of Regent Group and its hospital in Dhaka's Uttara were sealed off on similar allegations.

Later, the RAB arrested its chairman Shahed from Benapole border area in this connection.

On June 15, a man named Kamal Hossain filed the case with Tejgaon Police Station on the charge of issuing fake reports of coronavirus tests.

JKG Healthcare issued reports to 27,000 people in different parts of the country, including Dhaka, without collecting samples for coronavirus tests.

Most of the reports have been found fake. The company was raided on June 23 and sealed off.