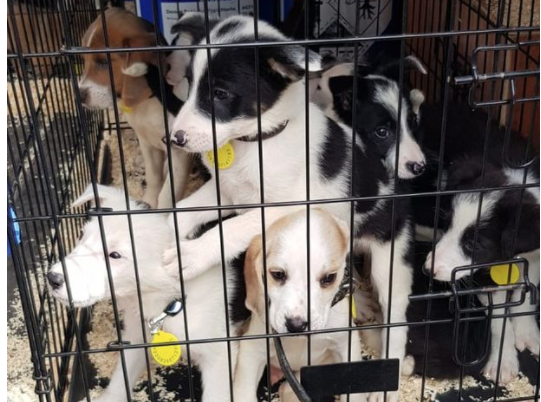 A man has been arrested on suspicion of stealing around 40 puppies after a van was stopped on the M6 The vehicle was intercepted after reports of a man loading dogs into a van in Gloucestershire,UK.

Police this morning said the pups were being looked after by the RSPCA.

Pictures show the dogs packed into a tiny cage in the vehicle.

A 24-year-old man from Durham was arrested on Saturday, and has since been released pending further investigation.

In a statement Gloucestershire Police said: "Police were called to Beeches Road in Charlton Kings on Saturday following reports that a man was seen to have been loading a number of puppies into a van.

"Officers conducted enquiries into the vehicle before liaising with colleagues at West Mercia Police who located and stopped the van on the M6 before detaining the man.

"A 24-year-old man from Durham was arrested on suspicion of the theft of puppies and has been transported to custody in Gloucestershire where he remains at this time.

"Between 30 and 40 puppies were recovered from the van and have been taken to an RSPCA vet surgery for assessment."

Mirror Online has contacted the RSPCA for an update on the dogs' condition.