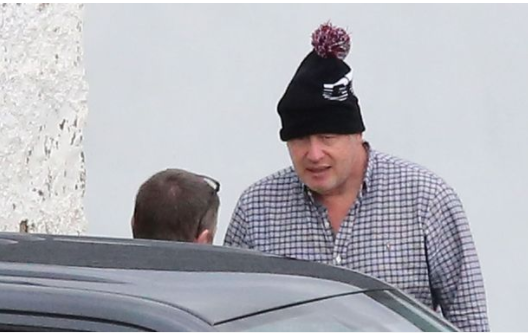 Boris Johnson has been pictured enjoying a highland getaway, even as his government faces a string of crises over exams and coronavirus.
While he has claimed in public to be a fan of the Great British Holiday, the PM is more often seen enjoying luxury stays overseas- like his 10-day break on a private Caribbean island over New Year.

But with millions of Brits tearing up their holiday plans due to France and Croatia being placed on coroanvirus quarantine lists, a foreign jaunt probably wasn't on the cards for Boris Johnson this year.

Instead, it appears, he's chosen to enjoy the bracing winds of the Scottish highlands.

Slightly bleak images emerged overnight of the PM's cliff-side bolt hole - complete with a massive tent in the grounds.
The tent itself is understood to be a 'bell tent', the likes of which are available for around £259 from Boutique Camping.

Johnson was seen chatting to his security team, dressed in a blue checked shirt and tan trousers, topped off with a black, woolly bobble hat.

One tourist who saw the couple told the Mail : "It looked like any other normal family day out."

Of course, Boris Johnson isn't the first PM to plump for a UK staycation when an overseas holiday is either impossible or not politically advisable.