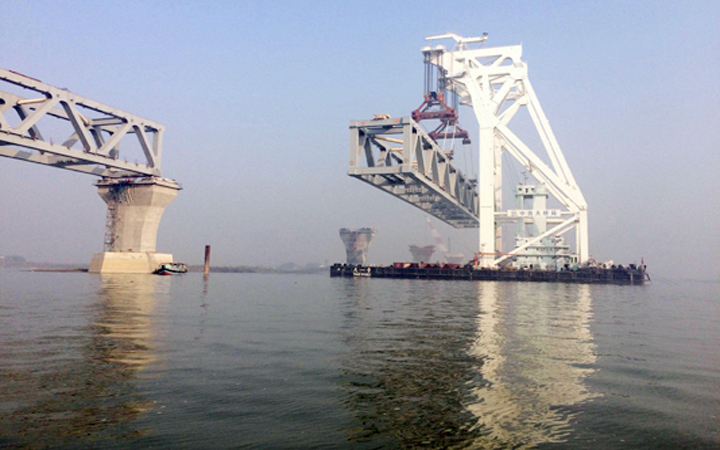 A new span of the under-construction Padma bridge is likely to be installed in the middle of the next month after a pause of more than three months, project officials said.

Besides, the project is also trying to recoup the recent loss of washing away precast road slabs and railway stringers due to river erosion to bring back the top priority project on track, they added.

After installation of 31st span on June 10, a new plan to install 32nd span on June 30 was scrapped because of strong current in the mighty River Padma during the rainy season.  “The span installation work will resume from the middle of September after water starts receding in the Padma River,” Project Director Shafiqul Islam said.

A fresh plan has been prepared to mount a span in September and three each in next three months to complete the total span work as only 10 out of 41 spans are left.

The project director said that the remaining 10 spans already reached Mawa construction yard, seven of them are ready for installation and work of three spans are going on.

Meanwhile, construction of washed away road slabs has already started on the project site while a fresh order for supplying the lost railway stringers from Luxemburg has been issued, said project officials.

Pre-casting of five roadway slabs has already completed and the rest may take one month. But delivery of the railway stringers from Luxemburg may take nearly four months, according to project officials.

In reply to a question, an official of Chinese construction firm said project officials could not predict in advance that the floods will cause erosion to the construction site.

The Padma multipurpose bridge project is being implemented in five different portions. Of them, the main bridge construction and river training work are yet to be finished although other has been complete.

The project’s current completion deadline is June 2021, but there is doubt that it could face six months’ delay due to Covid-19 impacts.  The project director, however, is still hopeful that they will be able to meet the current deadline if all the spans are installed by this December.