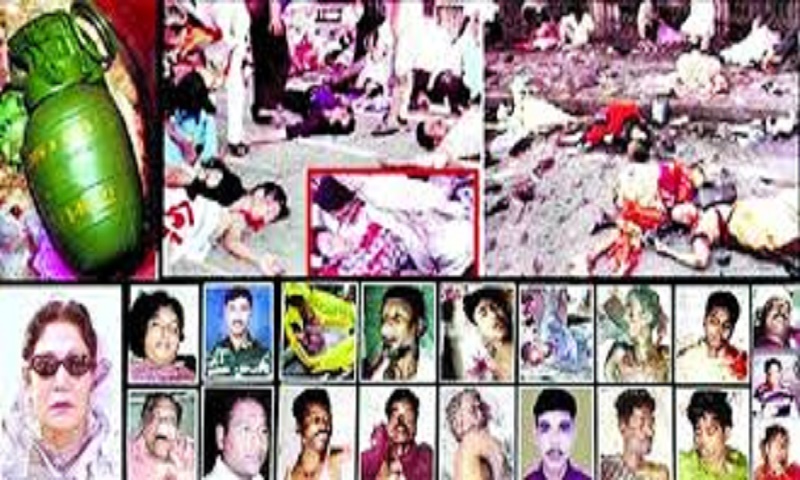 The nation will observe the 16th anniversary of the deadly August 21 grenade attack today to pay tributes to victims.

But victims and their families are still waiting for justice as the cases filed over the attack are pending with the High Court for hearing on death reference and appeals.

At least 24 people were killed and around 300 injured in the grisly attack on an Awami League rally in the capital on August 21, 2004. Incumbent Prime Minister Sheikh Hasina, the then opposition leader in parliament, narrowly escaped the attack with an ear injury.

With the verdict pronounced by Dhaka’s 1st Speedy Trial Tribunal Judge Shahed Nur Uddin on October 10, 2018, the nation was freed from the stigma of committing the most shocking crime in the political history.

Later, the lower court on November 27, 2018, sent a 37,385-page case document including the verdict to the High Court for further proceedings.

The High Court on January 13, 2019, accepted appeals filed by the convicts in the two cases for hearing.

Almost two years have passed since the delivery of the verdicts but the High Court is yet to start the hearing on the death references and appeals of the convicts in the cases.

The victims and family members are stilling waiting to see the execution of lower court verdicts through quick completion of next proceedings in the cases.

Court sources said the hearing on death references and appeals was delayed as the paper-book was not ready. But the paper books arrived in HC from Bangladesh Government Press on August 16.

As the paper-book reached, now the chief justice will send the death references and appeals to an HC bench for their hearing and disposal.

Talking to the Daily Sun, Attorney General Mahbubey Alam said the government will take necessary steps for quickly hearing and disposing of their death references and appeals in the cases.

“There were efforts to halt the trial proceedings and save the real culprits in the cases. So we think the hearing of the case should be held on a priority basis. We will also seek to the court for hearing on priority bases in the case,” he said.

“Such a massacre to wipe out a political party has not happened in any other country in the world,” said the chief state lawyer, expressing hope that the hearing in the cases would be held on a priority basis with the HC.

While delivering the verdict, Judge Shahed Nuruddin stated that in a democratic state, whichever party comes to power, it has to try its best to establish democracy by applying a liberal policy towards the opposition party.

But a ruling party’s attempt to reap political benefits by killing opposition leaders cannot be a manifestation of democratic thoughts.

He also observed that “In politics, inevitably there will be myriad disputes between the ruling party and the opposition, but trying to eliminate leaders of the opposition is not acceptable.” “General people don’t want such politics,” said the judge. “For the party in power to try to gain political advantage by killing opposition leaders is not indicative of democratic thought,” he said.

“The public does not want this. They want to understand a party’s policy, ideology and plans by participating in their rally and processions. The public will turn away from politics if throwing Arges grenades to kill political leaders and common people becomes a trend.”

In its verdict, the court talked about the country’s political atmosphere since the 1971 Liberation War saying that the defeated forces of 1971 attempted to diminish the spirit of the war and halt development of the newly independent country by killing Bangabandhu Sheikh Mujibur Rahman and his family members.

Following Bangabandhu’s assassination on August 15, 1975, four national leaders were murdered inside the prison through a conspiracy. But the conspiracy did not stop. It continued, said the court, adding that later, an evil attempt was made on August 21, 2004, to make the AL leaderless.

The court observed that the grenade attack was meant to eliminate top Awami League leaders from politics and that local militants actively participated in the attacks.

With the assistance of international militants and state machinery, the perpetrators directed Arges grenades— normally used in warfare—in broad daylight, on a political rally in the heart of the country’s capital. The judge put forward some questions – “Why was such lethal weapon used?”

Before delivering of the verdict, the court recorded testimonies of 225 out of 511 prosecution witnesses and 20 defence witnesses in the cases.

History of the cases

Two separate cases, one for murder and another under the Explosives Substances Act were filed on August 22, 2004, and the police on June 9, 2008, submitted the charge sheet. The court on September 29, 2008, framed charges in the case.

During the BNP-Jamaat regime till October 2006, the investigators were trying to divert the probe to a wrong direction to save the real culprits. The cooked-up story of Joj Mia was brought to public attention by the then CID officials’ attempt to derail the investigation.

Criminal Investigation Department (CID) of police on July 2, 2011, submitted a supplementary charge sheet before the court and the court on March 18, 2012, framed charges afresh after taking the new charge sheet into cognizance.

According to the charge sheets, 52 people were held accused in the case while prosecution suggested an influential quarter of the then BNP regime including party’s senior vice-chairman Tarique Rahman masterminded its shocking plot engaging militant outfit HuJI and subsequently made desperate efforts to protect the assailants.

Three of the accused —- top Huji leader Mufty Abdul Hannan, Sharif Shahedul Bipul and then Jamaat-e-Islami secretary general Ali Ahsan Mohammad Mujaheed, however, were executed after a trial in other cases.

A total of 31 accused including two former ministers faced the trial in person while 18 including Tarique Rahman were tried in absentia as they are believed to be staying abroad.

Tarique, now in London, and 17 others including several intelligence officials were earlier declared “absconding” as they were on the run to evade justice.

Eight suspects including three former police chiefs were on bail as the trial was underway while the court on September 18, 2018, scrapped their bail and ordered their confinement in jail with due facilities they deserved under law.