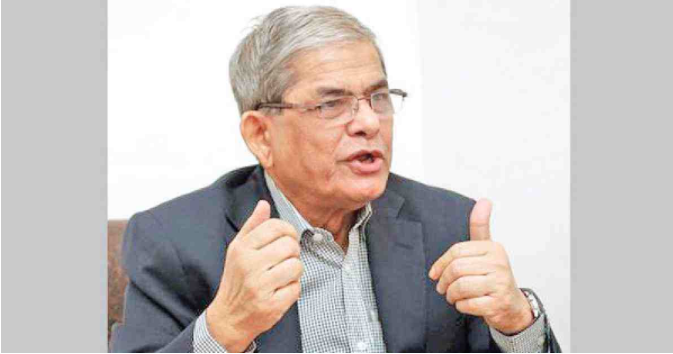 BNP on Thursday alleged that the level of the government’s fury towards BNP leaders and activists is gradually growing as it has got accustomed to oppressing its opponents.

“It seems the limitless attack of the authoritarianism on democratic forces have turned acute. The level of the government’s anger towards the leaders and activists of BNP and its associate bodies is increasing day by day,” said BNP Secretary General Mirza Fakhrul Islam Alamgir.

In a statement, he also said it appears that the government now cannot sleep in peace without oppressing the opposition activists.

The statement was issued protesting and condemning filing of a ‘false’ and ‘fabricated’ case against the leaders of the party’s Shyamnagar upazila unit in Satkhira.

Fakhrul alleged that false propaganda and slander have become an indispensable culture of the government while kidnapping, murder, bloodshed have become its order of the day.

He said the government cannot tolerate BNP’s extensive relief activities to assuage the sufferings of people affected by both the coronavirus and floods. “That’s why the current regime has become desperate to harass our leaders and activists in various ways, including sending them to jail in false cases.”

Fakhrul alleged that the law enforcers are conducting a combing operation and raiding the houses of the leaders and activists of BNP and its associate bodies at Shyamnagar upazila, forcing them to leave their areas.

He demanded the government immediately withdraw the ‘false’ case against the BNP leaders and activists.