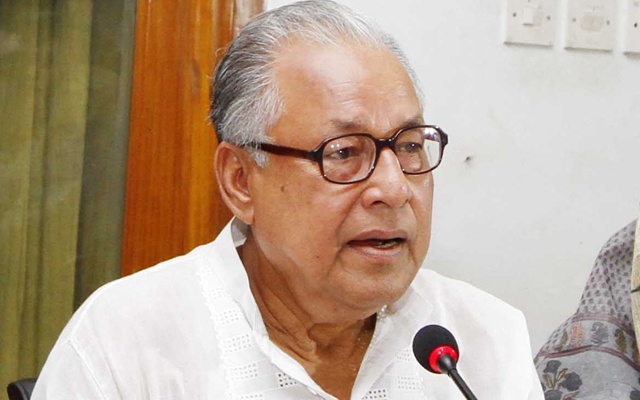 BNP senior leader Nazrul Islam Khan on Wednesday urged the government to inform people about whether Indian Foreign Secretary Harsh Vardhan Shringla came here for ‘mending friendship or for any other reason’.

“The Indian Foreign Secretary can visit our country at any time. But what he discussed remained secret. We don't know detailed about what he discussed. What we saw in the newspapers that he has come to repair the weakness of friendship,” he said.

The BNP leader said, “It’s the responsibility of the government to let people know what they discussed and what was its stance. We hope the government will uphold people’s right by informing them about what he (Shringla) said about foreign policy.”

He came up with the remarks while talking to reporters after placing a wreath at BNP founder Ziaur Rahman’s grave along with leaders and activists of Jatiyatabadi Swechchasebak Dal, marking its 40th founding anniversary.

Shringla came to Dhaka on Tuesday on a two-day visit to discuss and take forward cooperation on matters of mutual interest, said the Indian High Commission in Dhaka soon after his sudden arrival.

Nazrul, a BNP standing committee member, said the government discussed many things and signed many deals with India in the past keeping people in the dark. “They still didn’t disclose details about many deals.”

He said their party believes in the basic principle of Bangladesh’s foreign policy that 'friendship to all and malice to none. “BNP wants respectful cooperation and good relations with all countries, including the neighbouring ones, on the basis of equality.”

The BNP leader also said their party wants the current government to protect the interests of the country and its people. “We hope the country’s interests will be protected through the visit of the Indian Foreign Secretary, and this visit should not be mere a formality.”

He came down hard on Awami League General Secretary Obaidul Quader for his comment that Ziaur Rahman is only a ‘footnote’ in the history of Bangladesh’s Liberation War. “If Ziaur Rahman is the footnote, Obaidul Quader is nowhere in the history of the Liberation War. The name of the person from whom people of this country had heard the declaration of independence was Major Zia.”

Accusing the government of conspiring and carrying out false propaganda against Zia, Nazrul urged it to stop the ‘dirty politics and mudslinging’.