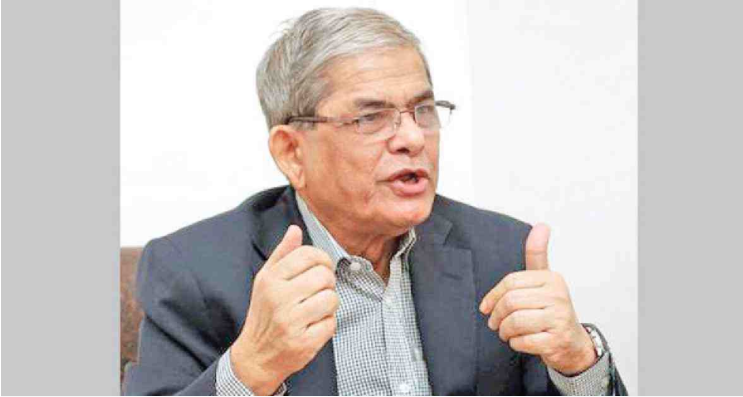 Accusing the government of indulging in ‘bad politics by distorting history’, BNP on Tuesday urged it to come to the path of national unity to tackle coronavirus and its fallouts instead of dividing the nation.

"The nation is observing with serious anger that an organised and disgusting conspiracy and false propaganda are going on with a dirty motive to discredit Ziaur Rahman. This evil effort has got a new pace through distorting the historic role of Ziaur Rahman by the head of government on August 15,” said BNP secretary general Mirza Fakhrul Islam Alamgir.

Speaking at an online press conference, he also alleged that the government is doing bad politics involving Zia with the tragic incident of August 15, 1975 to hang onto power. “We strongly protest and condemn such conspiracies and false campaign against Ziaur Rahman.”

The BNP leader said a united and concerted effort is needed as the nation is facing a crisis amid the ongoing corona disaster and economic uncertainty.

He said their party has already called for a national unity in the greater interest of the nation and they again urged the government to immediately stop the ill campaign and propaganda against Zia, Khaleda Zia and Tarique Rahman.

“Let’s get united and go back to a healthy democracy, regardless of party affiliation…we again call upon the ruling party to shun this heinous act of distorting history and come to the path of national unity in the interest of the country and the nation,” Fakhrul said.

BNP arranged the press conference at its Chairperson’s Gulshan office to give the party’s reaction to the Prime Minister’s recent comments involving Zia and his party.

Fakhrul alleged that the government is making efforts to demean Zia by distorting history and resorting to lies as it established a ‘fascist and authoritarian’ rule in the country deviating from the Liberation War spirit.

He claimed that people have got aggrieved and shocked seriously as the government has resorted to character assassination and false propaganda to malign Zia.

Referring to the August 15 incident, the BNP leader said, "Those who killed President Sheikh Mujibur Rahman and his family members have already been determined by the court in the case filed by Sheikh Hasina. Nothing was found to blame Zia for the killing. Even, neither Ziaur Rahman nor anyone close to him had been made accused in that case. They’ve now started a conspiracy to implicate Ziaur Rahman and Khaleda Zia in the incident.”

Fakhrul alleged that a video containing false and baseless hate speech of Bangabandhu’s convicted killer Abdul Majed was recorded illegally in custody before his execution, and the government has forced media to air it and made it viral on social media by recruiting a paid cyber force with an evil motive. “This move could lead to new controversies over the judicial process and the verdict. Such an illegal move is, in fact, nothing more than bad politics.”

He said the propaganda against Ziaur Rahman by airing killer Majed’s statement is purely a politically motivated lie. “The historical fact cannot be denied by putting a gun on Majed's shoulder.”