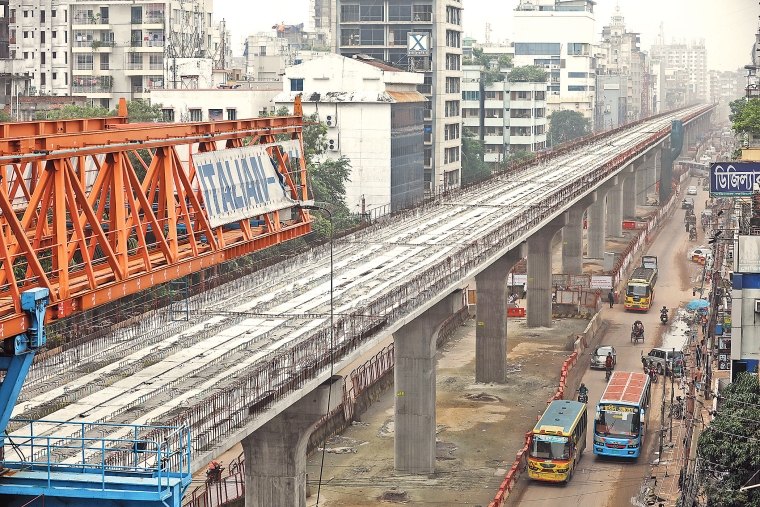 The work of much-coveted metro rail project has resumed recently, though not in full swing, after a long hiatus caused by the ongoing coronavirus pandemic.

The dream project, financially and technically supported by Japan, nearly came to a standstill in March and April as Japanese experts, engineers and contractors left Bangladesh after the onslaught of virus.

“The metro rail project became stagnant after the departure of Japanese project officials. But the work has resumed after some Japanese experts joined the work,” a DMTCL official said, seeking not to be named as he was not authorised to talk to the media.

He claimed that the project work never fully stopped as the scheme is being implemented in eight packages and any of the eight was going on.

Manufacturing of first set of the boggies has already been completed in Japan while work of another four sets is going on, according to the official.

However, he admitted that some experts, consultants and even some Japanese contractors are still in Japan as the Japanese government put a restriction on their citizens’ going out of the country during the crisis.

There is also restriction on Bangladeshi people’s visit to Japan, which has made the problem more complicated.

The DMTCL official said: “Bangladesh is trying to get special permission from the Japanese government for the reciprocal visit of metro rail project people to and from Japan through intensified diplomatic efforts.”

He added that the work is yet to gather its earlier pace as the full Japanese supervision team is yet to return to Bangladesh.

Moreover, continuing work with maintaining health issues is a difficult task because fewer people can be engaged with the project work now, he also added.

Although full supervision team has not returned to work, some foreign experts and engineers are remotely supervising some project work and virtually holding weekly meetings, DMTCL officials said.

With the resumption of work, the overall progress of 20.10km elevated metro rail from Uttara 3rd phase to Motijheel increased to 47.10 percent till July this year.

The progress was stalled at 44.12 percent in March and April after the virus outbreak in the country.

The first phase from Uttara to Agargaon section, which is supposed to be completed by December 2021, has so far advanced 74.50 percent while Agargaon-Motijheel segment advanced 41.40 percent.

Combined progress of electrical and mechanical system, rolling stock and depot equipment collection was found to be 33.34 percent.