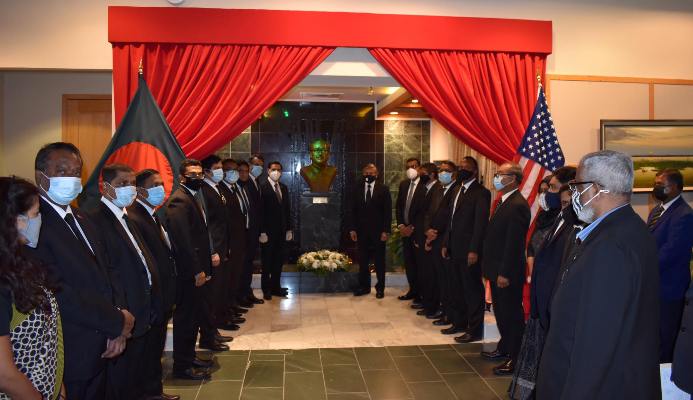 Bangladesh Ambassador to the USA Mohammad Ziauddin Saturday said efforts continued to this day for the return of the killers of the Father of the Nation Bangabandhu Sheikh Mujibur Rahman and members of his family.

The killers were tried and convicted in absentia and now hiding in foreign lands, including the United States.

“We are convinced that the U.S.A, as champion of democracy, human rights and the rule of law shall return the killer to Bangladesh soon,” he said, said a press release of the Embassy.

The Ambassador expressed his strong optimism at the National Mourning Day programme commemorating the 45th anniversary of martyrdom of Father of Nation Bangabandhu Sheikh Mujibur Rahman at Bangladesh embassy in Washington, D.C.

Ambassador Ziauddin characterised August 15 as a cruelest massacre in human history, observing that the killers not only slew an iconic leader and statesman but also tried to destroy its secular democratic state structure and extinguish the spirit and noble objectives of independence.

He said the killers joined by the anti-liberation traitors led by General Zia seized power illegally, destroyed democracy and introduced the politics of murder, coup and conspiracies.

The Zia regime tore the Constitution and adopted the infamous Indemnity Ordinance to block the trial of the killers and rewarded them with jobs in Bangladesh’s missions abroad, he said.

The Ambassador said Prime Minister Sheikh Hasina’s government scrapped the Indemnity Ordinance, began trial of the killers and executed the verdict in the Bangabandhu murder case.

“It became clear to all that Prime Minister Sheikh Hasina was and is determined to uphold democracy and the rule of law at any cost,” the Ambassador said.

Amid a melancholy atmosphere, the National Mourning Day was observed at the embassy with due solemnity and dignity. The officers and employees of the embassy wearing black badges offered rich tributes to the departed souls of the architect of Bangladesh’s independence and members of his family brutally killed.

The Day’s programmes began with the ceremonial hoisting of the national flag at half-mast by Ambassador Mohammad Ziauddin with the playing of the national anthem. Then, the Ambassador accompanied by officers and employees placed a floral wreath at the bust of the Father of the Nation and stood in solemn silence for a while paying homage to the great leader.

Other programmes include reading out of the messages of the national leaders, screening documentaries on life and work of Bangabandhu and special prayers for the martyrs of the August 15 tragedy.

A documentary on life and work of the Father of the Nation was screened. First Secretary & Head of the Chancery Md. Mahmudul Hassan conducted the programme.