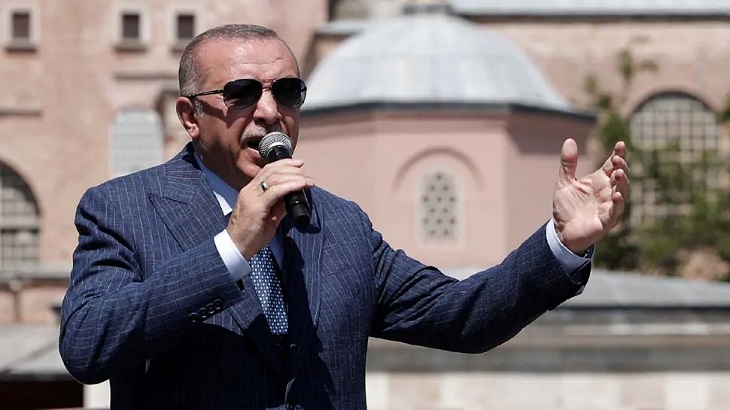 According to an Indian security report, Turkey has been sponsoring ISIS and its affiliates in Syria, similar to what Pakistan has been doing with IS-KP in Afghanistan. Such proxies have eliminated independent voices on the ground in Pakistan and Afghanistan, while at the same time, denying their involvement.

Indian security officials are also concerned over reports that Erdogan, in his efforts to bring down the Saudi leadership of the Islamic world, may find a partner in Pakistan. The recent open threat by Pakistan's Foreign Minister Shah Mehmood Qureshi to the Saudi leadership was due to Turkey's push and also the assurance of financial assistance to Pakistan.

“Erdogan has been using the religious institutions as well as terrorism to further his single point agenda of claiming the leadership of the Muslim Ummah. Turkey’s religious institution Diyanet has already made a substantial presence in India through its activities and now Erdogan plans to exploit ISIS Terrorists to trouble India. India shall be prepared to tackle it by adopting proactive measures," said an official aware of these developments.

Turkish Directorate of Religious Affairs — Diyanet has become a central Intuition for Erdogan’s plans of becoming the new ‘Caliph’ of the Islamic world. It is mostly copying the functioning religious system in Talabini Madrassas. Erdogan has reorganised the Diyanet and delivered a huge budget the institution, raised salaries and benefits of Imams, and is using them in the mosques as Erdogan’s party operatives, not only in Turkey but also in foreign countries.

Liberal and Gulenist Imams who refused to obey political orders from Erdogan’s party were eliminated from the Diyanet in recent years. Now each Imam across Turkey has become personally loyal to Erdogan.

As part of using Islam to spread Turkey's strategic influence, Erdogan has recently formed a Religious Services Directorate. The formation of the directorate was announced on August 06, 2020, as an institution which will coordinate and deliver commands of the Defence Ministry on religious services in the Turkish Army, in addition to serving as a religious counselling service.

The staff of the directorate will be in military rank and equal to other military officers in the Turkish Army. The staff usually coordinates and carries on religious services within forces, but according to the related law, they may get other military duties also.

Secondly, Erdogan will have the chance to control and profile more secular high-rank military officer with the help of ‘imam’ military officer. The possibility of plotting a coup against the Erdogan government has become less likely. Possibly, the profiling lists of such military officers will be considered for next promotions in the Turkish Army. Third, this is another premeditated step for the Erdogan regime to transfer the system from a secular democracy to religious republic.