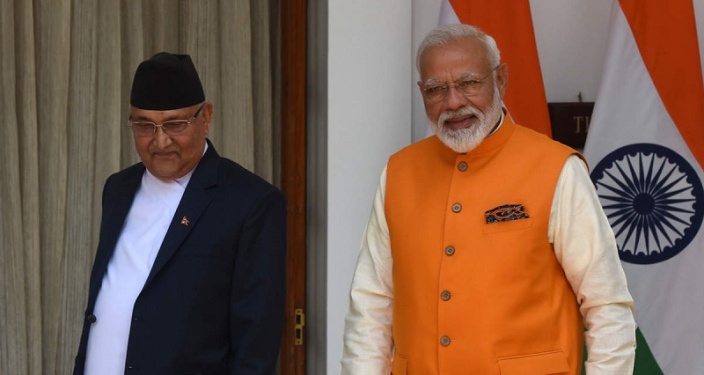 The prime ministers of India and Nepal spoke over the phone on Saturday to try to ease bilateral tensions that have existed since a boundary dispute erupted between the two countries in May.

Indian Prime Minister Narendra Modi received a call from his Nepalese counterpart, K. P. Sharma Oli, greeting India on its Independence Day and its recent election as a non-permanent member of the U.N. Security Council, a statement by India’s External Affairs Ministry said.

The border dispute between the countries began over India’s inauguration in May of a Himalayan link road built in a disputed region that lies at a strategic three-way junction with Tibet and China.

Nepal has been complaining that India is not responding to its offer made in November and December last year to hold official-level talks to resolve the issue.

The brief statements issued by the two sides on Saturday didn’t say whether the two countries plan to hold official-level talks on the issue any time soon.

India inaugurated the 80-kilometer (50-mile) Lipu Lekh road, which is the shortest route between New Delhi and Kailash-Mansarovar, a revered Hindu pilgrimage site in the Tibetan plateau. India said the road did not illegally cross into neighboring Nepal.

Nepal has fiercely contested India’s claim on the territory, which it has included in contemporary boundary maps as part of the Indian state of Uttarakhand, because of its potential as an economic corridor.

Nepal, which was never under colonial rule, has long claimed the areas of Limpiyadhura, Kalapani and Lipu Lekh in accordance with the 1816 Sugauli treaty with the British Raj, although these areas have remained in control of Indian troops since India fought a war with China in 1962.