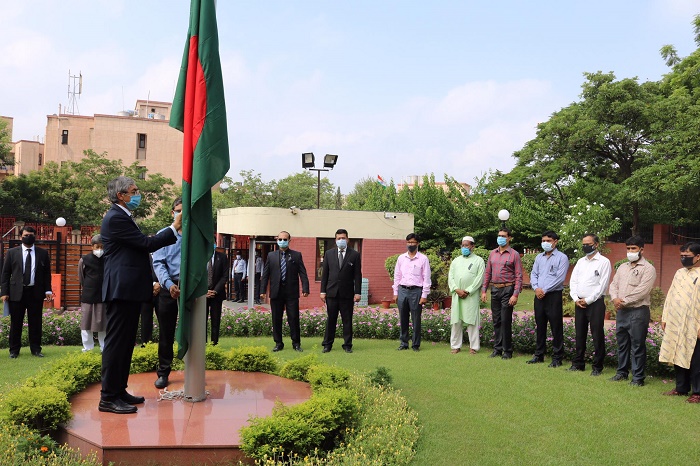 The day marks the 45h anniversary of the assassination of Father of the Nation Bangabandhu Sheikh Mujibur Rahman along with 18 other members of his family on August 15, 1975.

At a discussion meeting on this occasion High Commissioner Muhammad Imran paid homage to Bangabandhu, the Greatest Bengali of All time, said a press release.

He said, “While we mourn the death of Bangabandhu, we also pledge in this Mujib Borsho to turn the grief of his loss into strength and engage ourselves in building a hunger and poverty free prosperous Bangladesh.”

He said the unfinished task of building Sonar Bangla, the dream of Bangabandhu, is being accomplished by his able daughter Prime Minister Sheikh Hasina.

The country, he said is now on the pathway of prosperity and Bangladesh is now a role model of development.

The meeting held at Bangabandhu Maitree Hall of the mission was also participated by senior journalist Gautam Lahiri, former president of Press Club of India and Dipanjan Roy Chowdhury, a senior correspondent of the Economic Times.

Lahiri said the killers could kill Bangabandhu, but they failed to eliminate his ideology, Mujibism, which focuses on nationalism and secularism, development and global peace.

Dipanjan highlighted the growing economic relations between India and Bangladesh and the growth of connectivity.

The function witnessed the unveiling of a special publication, Immortal Bangabandhu, by the high commissioner, joined by other officers and two guest speakers.

A documentary on the life of Bangabandhu was also screened.

A minute of silence was observed and a doa was offered in memory of the martyrs of the 15th August.

Deputy High Commissioner at the mission A.T.M Rokebul Haque conveyed vote of thanks.