Bangabandhu: The harbinger of friendship between Bangladesh and China 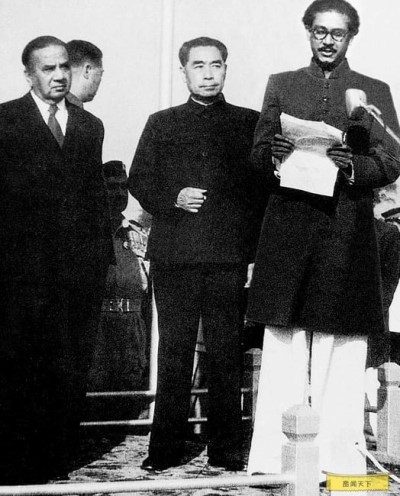 Sheikh Mujibur Rahman with former Chinese Premier Zhou Enlai at Dhaka Stadium in 1957. Huseyn Shaheed Suhrawardy is also beside them

Today marks the National Mourning Day of Bangladesh. On this day in 1975, Father of the Nation Bangabandhu Sheikh Mujibur Rahman and most of his family members were assassinated by a group of disgruntled army officers. On this solemn occasion, the government and people of China pay rich tribute to the memory of the greatest Bengali of all time.

Bangabandhu is always revered in China for his contributions to planting the seed of friendship between the two nations. History testifies that Chinese late Premier Zhou Enlai visited Bangladesh twice in the 1950s and 1960s and Bangabandhu also visited China twice in 1952 and 1957.

Chairman Mao Zedong and Chinese people warmly received Sheikh Mujib in China. Through their visits, the great leaders of our nations seeded the friendship between the Chinese and the Bengali nations long before the diplomatic ties were formally established. The historic friendship has now grown into a giant tree with deep roots and rich fruits. People of the two countries are reaping dividends of good ties.

The autobiography of Bangabandhu titled The New China as I saw It (Amar Dekha Naya Chin) has really mesmerized me owing to the fact that the autobiography has successfully documented the true essence of China. The great leader has also put the marks of his visionary mind and farsightedness in the autobiography.

As a great statesman, Sheikh Mujib could understand the significance and magnanimity of the revolution in China led by the Communist Party. With his farsightedness, the charismatic leader foresaw the brightest future of the newly established the People's Republic of China. This is really miraculous that China has already walked a long way proving the foretelling of Bangabandhu, written in the autobiography, right.

Bangabandhu had written that he had truly been happy with the development of China. China had achieved its development not only through leadership but also with the hardworking of its general workers. The country had separate hospitals for workers. They enjoyed medical leave with payments.

The visionary leader has drawn a good comparison between the conditions of farmers of erstwhile Pakistan and China. Sheikh Mujib has put down that farmers of his country don't get even their production costs of jute. But traders earn huge money selling jute at higher prices. On the contrary, China has established a balanced system that has ensured Chinese farmers meet their daily needs well by selling jute.

During his China visit, the young Bengali leader could realise the need for uprooting corruption from every stratum of society to develop a country. Therefore, he has written that corruption is like the cancer of society. If it can once enter society, it's actually difficult to get rid of the corruption.

I have been overwhelmed by how Bangabandhu has picked up a trifling matter like the salary ranges of China and Pakistan in a significant way. He has mentioned that Chairman Mao receives the highest salary in China. As the leader of some 600 million people, he gets only Tk. 500 monthly, while the lowest-paid employees receive only Tk. 50 a month.

The Chinese government does everything so that they can run their families at Tk. 50. On the contrary, the Pakistani president gets the highest salary of Tk. 12,000 while the lowest-paid employees get Tk. 20-25. But commodity prices are not stable in Pakistani markets.

In a bid to portray real China, Bangabandhu has mentioned that there was no piece of land left uncultivated in China. Even the pools and reservoirs besides the railway roads are also cultivated. The Father of the Nation has also written that many roads are built by the participation of locals as the Chinese government does not have enough funds. People have confidence in the government and they think these are their own work.

Bangabandhu has observed that the Chinese people have no arrogance and are very polite. They are open to befriending everyone. All of them think the state is theirs and they have to build it. The undisputed leader has put down that only in three years, the education system of China has witnessed a revolutionary change.

The system no longer creates clerks like the Pakistani education system. China has included agriculture, industry, engineering and technical education in its system.

Sheikh Mujib has proved his mettle as a prudent leader by pointing out that every country has its own privileged class. Rich zamindars are, for example, a privileged class in Pakistan, and industrialists in other countries. But children are the only privileged class in China. They receive different opportunities from the government.

All families are requested to send their children to school and provide them with a fixed amount of food and clothes. Those who can't afford them inform the government to receive assistance for the children. This is how China is building a new class of human. You can imagine that after 15 to 20 years when the children will grow up and work for China where the country will reach.

During his brief visit, the development of gender equality in China has also not skipped his attention. Bangabandhu has noted that men and women really enjoy equal rights. They equally work for the country and earn for themselves. They are not dependent upon each other and receive the same respect in society.

This is how Bangabandhu has spoken highly of China in his autobiography. We, government and people of China, are really grateful to the unanimous leader of the Bengali nation for his understanding of the magnanimity of the Chinese revolution even in its budding period and making infallible predictions about a brighter future for our country. We remember the great, charismatic, and by-born leader on his martyrdom day with due respect and dignity.

Along the same line of Bangabandhu, as his capable daughter, Prime Minister Sheikh Hasina has proved her worth as a global leader and statesman by leading the unprecedented development of Bangladesh in recent years.  As a time-tested friend, China always appreciates and is proud of the tremendous achievements of our close neighbour under her prudent leadership.

China and Bangladesh share many similarities on all fronts including cultural, economic and political. Just as Bangladesh dreams of becoming a developed nation by 2041, so does China in 2049. Both countries have the almost same challenges ahead on the way to graduating as developed nations from the least developed countries. As a reliable partner, China stands ready to move forward shoulder to shoulder with Bangladesh for the realisation of the common dreams of both the nations in the coming days.

(The author is Minister Counselor and Deputy Chief of Mission of Embassy of the People's Republic of China to Bangladesh.)