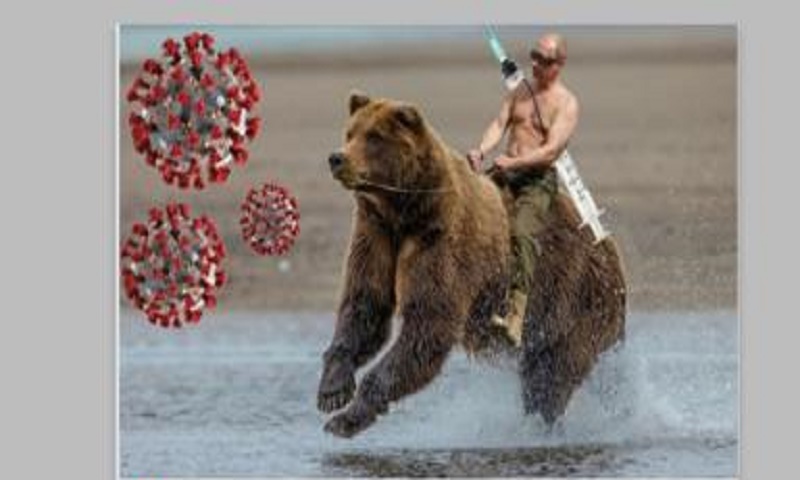 The announcement that Russia is forging ahead with its locally developed vaccine for Covid-19 has not only led to international concerns over its safety, but also generated a great deal of both misinformation and humour on social media platforms.

We've been looking at some of the more widely shared posts.

There have been many satirical memes about Russia's announcement, shared in a range of languages. Some show Russian President Vladimir Putin as a superhero, such as Spiderman or Ironman, saving the world.

One of the most popular being shared portrays Mr Putin riding a bear with a giant syringe strapped to his back.

A version of this meme even claims, incorrectly, that it was shared by Mr Putin himself.

Another widely shared post celebrating Russia's vaccine announcement appeared on a Facebook page supporting Mr Putin, and has been shared more than 200,000 times.

It's not an official account of the Russian president, who is believed to shun social media.

But many of the tens of thousands of people commenting in numerous languages on the post clearly believe it is.

The viral post compares the first Soviet satellite which "paved the way for humanity in space" with the Russian vaccine which "will pave the way to the future without Covid-19, masks and social isolation."

Increasing international concern that safety may have been compromised in developing a vaccine has led the World Health Organization (WHO) to urge Russia to follow international guidelines.

A reputation for exaggeration

Another post that also proved popular on Facebook claims that Russia has "repeatedly saved the world with its vaccines".

"This is a major overstatement" says Dr Dora Vargha, a historian and expert in Cold War-era disease control.

The post lists several vaccinations that were "invented" in Russia, among them those for cholera and polio.

It was, in fact, French scientist Louis Pasteur who discovered the first cholera vaccine - for a strain of the disease that affects chickens.

Later in 1885, Jaime Ferran, a Spanish doctor, developed a vaccine that immunised humans against cholera for the first time.

This was followed shortly after by another Cold War-era breakthrough - the first oral polio vaccine, which is still used to eradicate the disease around the world today.

It's been represented as both an American and a Russian, or Soviet, creation.

Dr Vargha says it should be seen as a collaborative effort between Dr Albert Sabin, an American, and Mikhail Chumakov, a Russian scientist.

An Italian post attributed a controversial quote to President Putin, but it doesn't appear to have been reported anywhere, including in the Russian media.

The image, which has been liked, commented on and shared over 35,000 times on Facebook says: "Pharmaceutical companies have asked us to delay the release of the vaccine! It's not about economics. Russia does not think about money when it comes to the lives of millions of people."

The quote may be a mistranslation of a similar post from the Putin fan page we looked at earlier. The post contains the same criticism of pharmaceutical companies and praise of Russia's values. However, as already established, this fan account is not Putin's, and he has not been quoted elsewhere making these statements.

Both posts paint criticism of Russia's plans to approve a vaccine early as being driven by profit-hungry pharmaceutical companies.

This ignores the biggest concerns scientists have about the premature rollout of a Russian vaccine, which are about the lack of published findings from Russia's trials so far, including safety data.

Other posts have chosen to focus on President Putin's daughter, who he said had received the vaccine.

Mr Putin didn't specify which one of his daughters had been given the vaccine, but said the only side-effects she experienced were a slightly raised temperature for a brief period.

A video has been circulating in India along with claims the clip shows a daughter of President Putin receiving the vaccine.

The footage is in fact of a participant in Russia's vaccine trial, but she has been identified in Russian media coverage as a cadet in a military medical academy and not Mr Putin's daughter.