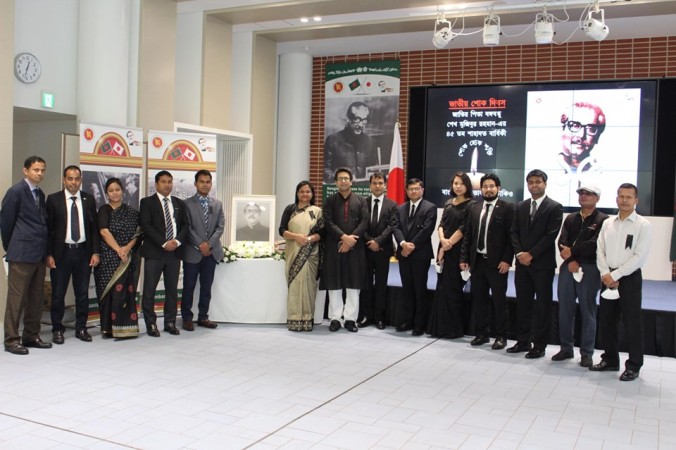 Bangladesh Embassy in Japan on Saturday observed the National Mourning Day and the 45th Death Anniversary of the Father of the Nation Bangabandhu Sheikh Mujibur Rahman in a respectful and solemn manner to pay tribute to the greatest leader of all time of the Nation.

The first part of the program began in the morning at the Embassy premise while the national flag was hoisted half-mast by the Chargé d' Affaires Dr Sahida Akter. Diplomats and staff members of the embassy and expatriate Bangladeshis were present on the occasion.

To mark the day and pay homage to the memory of Bangabandhu, one-minute silence was observed followed by special prayer (munajat) for the peace and salvation of the departed souls of Bangabandhu and his family members, according to a message received from Tokyo.

A discussion took place at the Bangabandhu Auditorium on the ideology, work and life of Bangabandhu Sheikh Mujibur Rahman – the visionary leader of Bangladesh.

In her opening remarks Chargé d' Affaires said that Bangabandhu Sheikh Mujibur Rahman was the savior for the Bengali nation who steered the whole nation towards freedom and founded the roots for his people to live with dignity and sovereignty.

She expressed her firm determination that despite the absence of Bangabandhu, we would follow his ideology and would contribute to nation building under the bold and visionary leadership of the daughter of Bangabandhu, our Honorable Prime Minister Sheikh Hasina.

Earlier, messages marking the day given by the President, Prime Minister, Foreign Minister and State Minister for Foreign Affairs were read out to the audience.

A video documentary on the life and works of Bangabandhu was also screened at the program.

Dr. Ziaul Abedin, Minister and Head of Chancery of the Embassy conducted the event.