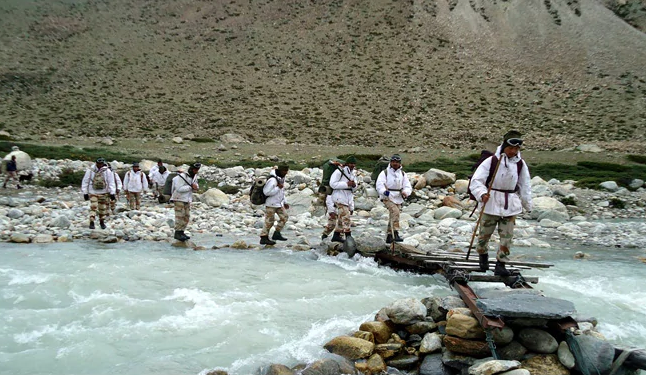 Not just Ladakh's Galwan Valley, Indian and Chinese soldiers faced off in a number of clashes along the Line of Actual Control between May and June this year.

The clash saw troops of the Indo-Tibetan Border Police (ITBP) to fight shoulder-to-shoulder with the army and respond to Chinese aggression effectively for up to 20 hours in some cases.

It was revealed by the force on Friday with new details of the volatile standoff on the eve of the 74th Independence Day.

As many as 21 soldiers who displayed exceptional courage during such clashes with China's People's Liberation Army (PLA) in Eastern Ladakh have been recommended for gallantry awards this year by ITBP Director General SS Deswal.

A statement released by ITBP said that DG Deswal has recommended 21 Gallantry medal recommendations, 294 DG Gallantry Commendations for ITBP personnel "for displaying raw courage and bravery" during the face-off with Chinese troops in eastern Ladakh in May-June.

Chinese soldiers hurled stones to attack Indian soldiers along the de-facto border in Ladakh, the ITBP said. At some places, the clashes lasted for 17-20 hours.

"The ITBP troops not only effectively used shields to protect themselves but also responded fiercely to PLA advancing troops and brought the situation under control. With the highest order of professional skills, ITBP troops fought shoulder to shoulder and also brought the injured Indian Army troops to the rear," the statement said.

In some areas, ITBP troops fought the whole night but gave a fitting reply to the "stone pelters of the PLA", the border force said.

Due to the high-altitude training and manoeuvring experience of the force in the Himalayan deployments, the ITBP troops kept the PLA at bay and because of an all-out response of ITBP jawans at almost all fronts, many hypersensitive areas were safely guarded, it added.

Indian and Chinese forces have been in a weeks-long standoff on their Himalayan border since before a hand-to-hand battle in which 20 Indian troops were killed on June 15. China also suffered casualties in the showdown but has not given figures.

The two sides blame each other for the clash in the Ladakh region and have since pulled back troops in some areas there while pursuing talks to ease the tensions.