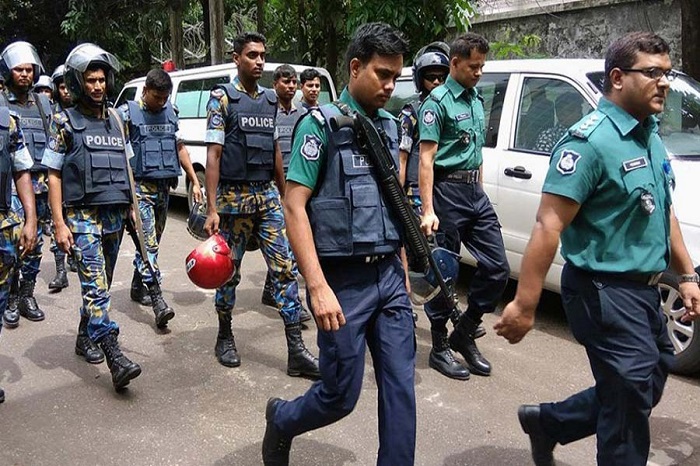 Dhaka Metropolitan Police (DMP) has taken strict security measures in and around Dhanmondi road-32 marking the National Mourning Day to be observed on Saturday.

“The DMP has taken adequate security measures including intensive surveillance along with deployment of adequate number of polices”, said DMP Commissioner M Shafiqul Islam while visiting Dhanmondi road no32 on Thursday.

The 45th martyrdom anniversary of Father of the Nation Bangabandhu Sheikh Mujibur Rahman and the National Mourning Day will be observed with state honour, said a DMP press release.

The people who will come to pay tribute at the portrait of Bangabandhu Sheikh Mujibur Rahman at Dhanmondi-32 on August 15, must to be searched before getting entry.

Simultaneously, archway and check-post will be installed at Banani graveyard and all have to access there after the due search.

Volunteer teams and along with deployment of adequate police and intelligence surveillance also will be intensified to ensure the security of the visitors.

The guests like VVIP, VIP, military and civil officials will enter through Manik Mia Avenue (Dhanmondi 27 no crossing), Mirpur Road (Metro Shopping Mall intersection), and western side of Dhanmondi road-32 and will leave through the same way.

To ensure one-way movement for different parties and organizations, the common people will access from Russell square and eastern side of Dhanmondi road-32 and go out to the western side.

Designated places have been earmarked for parking the vehicles at Dhanmondi-32 and Banani graveyard. Motorbike parking is prohibited at Mirpur road and surroundings of Dhanmondi road-32.

The programme venue at Dhanmondi-32 and Banani graveyard and its adjacent areas will be monitored under the close circuit camera (CCtv). Full time CCTV monitoring will be carried out from the makeshift police control room located at the venue places.

To ensure strict security, adequate number of police with uniform and plain clothes also will be deployed on the occasion. Even the dog squad and bomb disposal unit also will be kept at the venue.

River police patrol team also will be deployed at Dhanmondi lake. Police surveillance will be continued at the Dhanmondi and Banani graveyard area from today and all the hotels, guest house and mess at those areas will remain closed for the security purpose.

Law enforcing agencies will strictly monitor the social media with a view to prevent any posting of rumour on these social media.