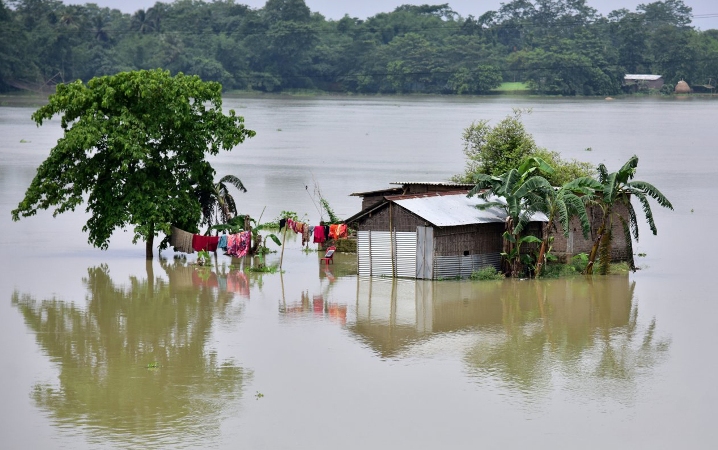 A fresh flood may hit the country’s northern region as water of the Brahmaputra and Jamuna rivers is in rising trend by the onrush of upstream water from the border region on Thursday.

“The Brahmaputra and Jamuna rivers are in rising trend and it may remain steady in the next 24 hours,” said Arifuzzaman Bhuiyan, executive engineer of the Flood Forecasting and Warning Centre (FFWC).

So far, flooding has claimed lives of at least 199 people in the country, official statistics say.

The flood-affected people in different areas are passing days in extreme misery as flood washed away all of their belongings, including houses, croplands, animals and other valuables.

They are suffering much for acute shortages of food and pure drinking water as soon as floodwater started receding. They are in want of flood relief.

The displaced people who returned home following improvements in the flood situation now rushed to take shelter on embankment, roads, highland and flood centres with their domestic animals and valuables as the river water is rising again on Thursday.

The marooned people have to live in open sky as their dwellings were washed away by floodwaters. They have also faced huge losses as their croplands were also washed away.

Now, they are seeking assistance to erect their houses and plant crops again on lands.

The government has distributed relief among flood victims in the affected areas, but these are not adequate, said victims.

Labour crisis in the flood-hit areas has also affected the people and they are passing life with endless hopes of government assistance.

Three major rivers are following above the danger level at three river stations on the day, according to the FFWC.

Scores of dwelling houses, schools, colleges, mosques and roads went under rivers due to unabated river erosion. The river erosion has rendered thousands of people homeless.

Meanwhile, flood victims are desperately looking for relief if they look boat or vehicle in the flood-affected areas, are rushing towards it to get relief.

The flood-affected people have been suffering due to an acute scarcity of food, pure drinking water and fuel oil as government’s relief is too meager to meet their requirements.

Local people have apprehended an outbreak of diarrhoea and other waterborne diseases in the flood-affected areas.

However, some areas are still flooded and a lot of houses need to be repaired and cleaned.