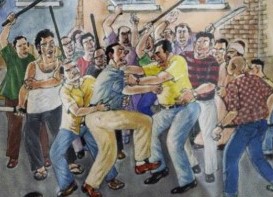 Three juvenile prisoners died in a violent clash at the correction centre in Jashore on Thursday.

The deceased are Parvez Hasan Rabbi (18) of Daulatpur in Khulna, Rasel alias Sujon (18) of Sherpur in Bogura and Naeem Hossain (17) of Shibganj in Bogura.

Police said two groups of youths were locked in a clash around 2:00pm at Pooler Haat Juvenile Correctional Centre under Kotwali Police Station.

During the clash, Rabbi, Sujon and Naeem sustained critical injuries and were admitted to Jashore General Hospital.

Within five days, the two groups were engaged in the clash twice, said Mushfiqur Rahman, an instructor at the correctional facility, expressing ignorance of reasons behind the feud.

The bodies of the deceased were kept at the hospital morgue.