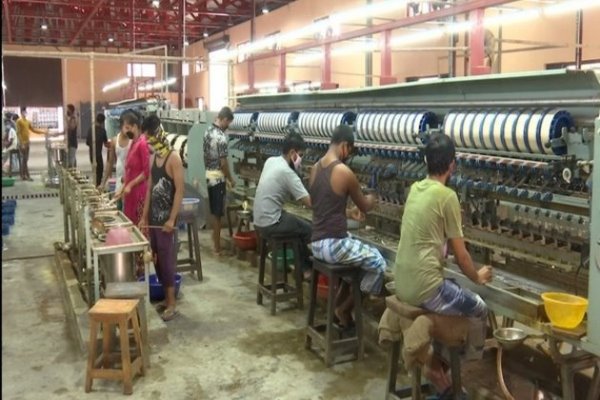 Sericulture in Jammu and Kashmir will get a boost with the newly established silk weaving and silk filatures factories at Bari Brahmana area of Samba district.
These new facilities have been established with project cost of Rs 16.80 crore and Rs 6.64 crore respectively.
Equipped with modern machinery and equipment under the expert guidance of the Central Silk Board, government of India, both the units have been built in a record time of two years, reports ANI.

The Principal Secretary of Industries and Commerce, Jammu & Kashmir, Manoj Dwivedi said that ranging from the treatment of cocoons to the production of silk and designing of finished fabrics like sarees, everything can be done at one place from now onwards with the establishment of these units.
The silk filatures and silk weaving factory has already produced 4,60,000 metres of silk fabric and it is estimated that in future over 40,000 families associated with sericulture in the Union Territory will be benefited with their establishment.
Moreover, with the intervention of Jammu Kashmir Industries, the cocoons growers in the region will be able to derive more profits.
While talking to ANI, the managing director of Jammu Kashmir Industries (JKI) Sanjay Handoo said that JKI is there on the behalf of the government to intervene in the cocoon market in order to stabilise it.
"Earlier, there used to be an open auction enabling people from outside to participate in it due to which the cocoon growers of Jammu did not get fair prices for their product. But now as JKI will be participating in these auctions and this intervention will secure the livelihood of thousands of cocoon growers as they will get genuine market rates for their produce," he said.
It is in this context that JKI will be procuring 60,000 kilogram cocoons in Jammu division that will be used in the newly established silk factory at Samba.
Jammu & Kashmir produces international grade silk which is mainly required by power-looms and export-oriented units.
Around 2,800 villages in the union territory have sericulture as an important economic activity.
Out of these, 1,500 villages are situated in Kashmir and the remaining 1,300 villages in the Jammu region.
Moreover, the territory has around 75 lakh mulberry trees and produces around 900 metric tonnes of silk every year.