‘Hasina, A Daughter's Tale’ to be screened on BTV, 8 private TV channels today 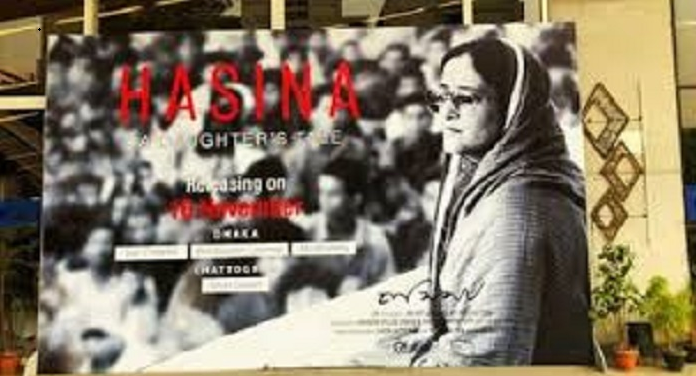 'Hasina, A Daughter's Tale', a docu-fiction, will be screened on Bangladesh Television and eight other private television channels on Friday marking the National Mourning Day.

Meanwhile, Machranga TV will screen it at 11am which will be repeated by the same channel at night.

Sadik Ahmed made the cinematography of the movie edited by Navnita Sen.

The movie focused on the life of Sheikh Hasina before and after of the August 15, 1975.

Sheikh Hasina's personal and political life was described in this documentary since her arrival in Dhaka with her family back in 1952.

The 15th August is the National Mourning Day of Bangladesh. On this day in 1975, the greatest Bangalee of all time, Father of the Nation Bangabandhu Sheikh Mujibur Rahman, along with most of his family members, was assassinated brutally by a cabal of military men.

Sheikh Hasina and her younger sister Sheikh Rehana, the two survivors of the August 15 carnage, were abroad in 1975.

Sheikh Hasina's return home in 1981, rebuilding Awami League and other democratic events were highlighted in the documentary.

Her intimacy with Bangabandhu, how she grew up and her commitment to politics were also reflected in the documentary which was screened in many places at home and abroad.