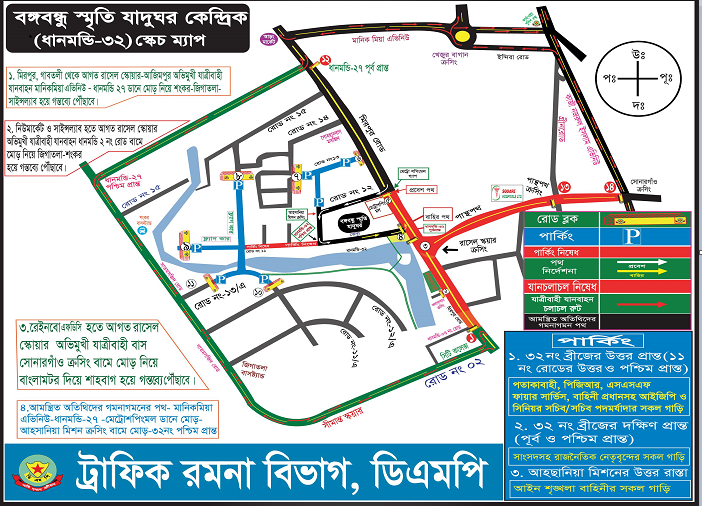 Dhaka Metropolitan Police (DMP) Thursday issued guidelines for vehicular movement in the capital ahead of the National Mourning Day to be observed tomorrow (August 15).

The nation will observe on Saturday (August 15) with due respect on the occasion of 45th death anniversary of Father of the Nation Bangabandhu Sheikh Mujibur Rahman.

President, prime minister, ministers and people from all walks of life will pay homage to Bangabandhu Sheikh Mujibur Rahman by placing floral wreaths at his portrait in front of Bangabandhu Memorial Museum at Dhanmondi Road No. 32.

In this regard, traffic movement will be curtailed around Dhanmondi-32 from early morning tomorrow (August 15), according to a DMP press release signed by DMP Commissioner Md Shafiqul Islam.

Car drivers / users traveling in Dhanmondi-32, Bangabandhu Memorial Museum area were requested to follow the following routes from the morning of 15th August till the end of the program in order to ensure smooth movement of vehicles and avoid traffic jams.

Russell Square-Azimpur-bound vehicles from Gabtoli will be diverted to Dhanmondi 27 and arrive at their destinations via Shankar-Jigatola-Science Lab.

Russell Square-bound vehicles from New Market and Science Lab will be diverted to the Jigatola-Shankar route.

Russell Square-bound buses from Rainbow FDC will be diverted to the Sonargaon Crossing-Bangla Motor-Shahbagh route.

Those coming to pay respects at Bangabandhu Memorial Museum via Manik Mia Avenue-Dhanmondi 27 must enter through the street next to Metro Shopping Mall and take a left turn in front of Ahsania Mission to reach Dhanmondi 32.

Cars belonging to PGR, SSF, fire service, chief of various forces including IGP, secretaries and other flag-bearing vehicles will be parked to the north and west of Dhanmondi road 11.

The east and west sides of Dhanmondi 32 Bridge have been designated for parking vehicles of political leaders, including MPs.

The vehicles of law enforcement officers will be parked to the north of Ahsania Mission.

During the above National Mourning Day program, DMP is seeking the full cooperation of the public to maintain order in the movement of vehicles and avoid traffic jams.

DMP is sincerely sorry for the temporary obstruction of the vehicles of the respected citizens.