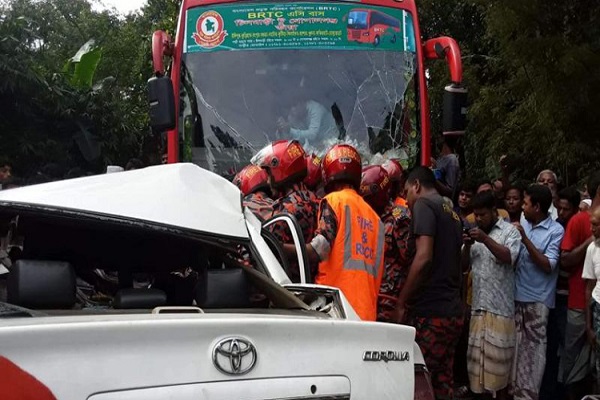 At least four people, including three members of a family, were killed and two others seriously injured in a head-on collision between a car and a BRTC bus in Sadar upazila of Kurigram on Thursday morning.

The deceased were identified as Mojibur Rahman, 55, his wife Bilkis Begum, 50, their son Billal Hossain, 25, and the car driver whose name could not be known immediately.

“A BRTC bus collided head-on with a Kurigram-bound private car on the Kurigram-Rangpur Highway in Raipur RDRS Bazar area of Kanthalbari Union at 8:15 am, leaving the driver of the car died on the spot and five other passengers of the car injured,” Kurigram Sadar police station Inspector (Investigation) Anwarul Islam said.

The condition of one of the other two injured is critical and he might be sent to Rangpur Medical College Hospital for better treatment, he added.