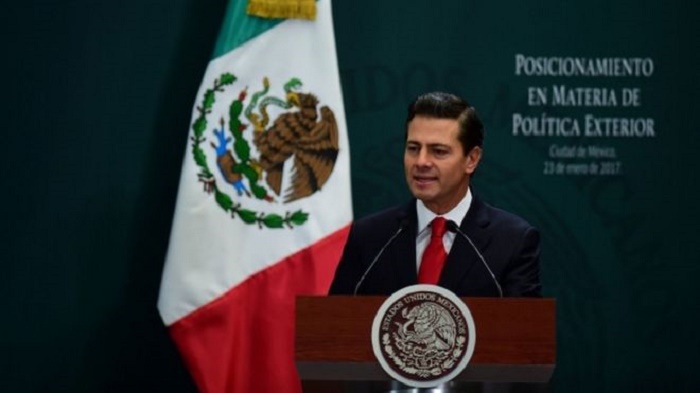 It comes after Emilio Lozoya, the ex-head of the state energy firm, accused Mr Peña Nieto of taking millions of dollars in bribes and bribing MPs.

The ex-president also made no comments on that allegation, but he has previously rejected allegations of corruption.

What did Emilio Lozoya say?

Mr Lozoya was a former top official during Mr Peña Nieto's 2012 campaign, and head of the state-owned oil giant Pemex from 2012 to 2016.

Mr Lozoya said Mr Peña Nieto and former Finance Minister Luis Videgaray had ordered him to funnel more than $4m in bribes from Odebrecht into the 2012 presidential election campaign.

In a second allegation, Mr Lozoya said that once in power Mr Peña Nieto and Mr Videgaray used a similar amount to bribe lawmakers to ensure the passage of a crucial energy reform bill through parliament.

Mr Lozoya said he could bring in four witnesses, as well as video and other documents to back up his accusations.

Mr Lozoya was one of the most powerful figures in Mexico when he was the president's adviser.

Neither Mr Peña Nieto nor Mr Videgaray have commented on the specific allegations against them. They have not been charged with anything.

However, Mexican Attorney General Alejandro Gertz considered the testimony important enough to have launched an investigation into the matter.

In the past, no former president in Mexico has gone to jail despite successive governments being tainted by widespread corruption, the BBC's Mexico correspondent Will Grant says.

Incumbent President Andrés Manuel López Obrador had earlier said he was not in favour of bringing charges against his predecessor - but would defer to any decision reached by the attorney general.