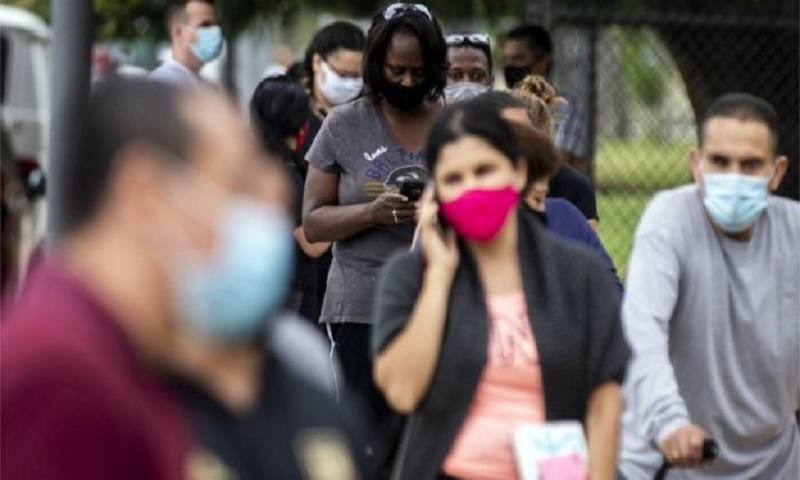 Earlier this year, California was praised for an early lockdown, which helped stem the pandemic in the US state. But cases have since surged. What's next for the Golden State, known for Hollywood, sunshine and celebrity?

For years tourists flocked to the Hollywood Walk of Fame and there was always enough work to go around. But now there are more palm trees than people and the stars once hard to find under the feet of potential customers, now bake, exposed to the midday sun.

Hope was briefly on the horizon when California Governor Gavin Newsom announced a phased reopening plan. He said it would be a dimmer switch, gradually shining a brighter light at the end of this dark tunnel.

But cases began to rise again after the Memorial Day weekend in late May - and the dimmer switch has now been turned down and the reopening plan is in reverse. There are now over 550,000 known cases in California, and over 10,000 people have died.

"You can't survive like this," DeAngelis says. "There are no tourists."

This weekend, California's Department of Public Health director abruptly resigned even as California struggles to contain the outbreak. The resignation came days after a computer glitch was found that might have caused the state to significantly undercount recent Covid-19 cases.

With indoor operations for restaurants, gyms, and hair and nail salons halted once more, every piece of pavement and parking lot has become coveted real estate as businesses take to the streets determined not to add to the continually climbing death count. Barbers and nail technicians have erected tents to protect themselves from the sun as they try to carry on regardless.

In West Hollywood teams of Sheriff's deputies weave between them. They are on patrol making sure the state-wide mask mandate is upheld and ensuring everyone here is doing their bit to flatten the coronavirus's unwelcome upward curve. Most people are complying. So far they have issued just over a dozen fines.

The economic impact of the pandemic is evident at almost every turn. Businesses are boarded up and there are "For lease" signs seemingly in every other window along famous shopping streets in Los Angeles like Melrose Avenue and the Sunset Strip.

But hidden behind the plywood is hope - Orly Dahan is surveying his empty shop window. But when I ask him if he's had to shut down, he says this is his new premises. He is expanding.

Even though his fashion retail and manufacturing business Gold Hawk is down by 90%, he says now is the time to strike good deals with commercial landlords. Recovery will come, he says, and when it does he will be ready for it.

But in Hollywood where the film industry would normally contribute some $50bn (£38bn) to the Californian economy, hope is not currently in plentiful supply.

Cinemas have "To be continued…." signs above the doorways. Some theatres now have homeless people sleeping in the entryways - a bit of shade off the sidewalk in buildings that haven't been open for months. It is unlikely that they'll have to make their beds elsewhere anytime soon.

There had been high hopes that the release of Christopher Nolan's time bending science fiction film Tenet would be the one to lure audiences away from their sofas and streaming services and back into cinemas.

People say they are dying to see it. But when Warner Brothers seriously wondered would they? Should they? The release date was pushed, then postponed indefinitely before they announced it will now debut internationally at the end of August before opening in select cities in North America at the beginning of September. It is an attempt at salvaging a summer release, traditionally Hollywood's most lucrative season.

There are fears among producers and directors that the film industry could be pushed out of Hollywood permanently. Some productions have already relocated to states and countries with a lower case count.

But economist Larry Harris from the University of Southern California says those fears are overstated. California is uniquely placed geographically with desert, beach and city shots readily available. It has a huge talent pool and a plethora of studios.

But it's also the weather, and the light, particularly LA's fabled "magic hour" around sunset which casts golden hues over the hills and valleys that first lured and will hopefully keep filmmakers here.

But at Chapman Leonard, a family run studio equipment company that's been in operation for 75 years, there is a sorry scene. Thousands of dollies and camera cranes that would normally be in action on TV or film sets, lie idle, spilling out of packed warehouses, others are left stranded on abandoned studio lots.

Christine Chapman-Huenergardt, the marketing manager and daughter of the owner, grew up using them as climbing frames. She's never seen anything like this. They've already had to lay off people who've worked here for several decades. If California goes back into lockdown, she says, they'll have to shut down.

"This has definitely been one of the most memorable years for hardship that any company of our type could go through," Chapman-Huenergardt says.

Meanwhile another glimmer of hope that came from the flood lights of the LA Dodgers' Stadium as major league baseball came back, could soon be snuffed out.

They played to a cardboard cut-out crowd in an otherwise empty stadium. Outside there was a stark reminder of why. Cars queued not for seats, but for Covid tests.