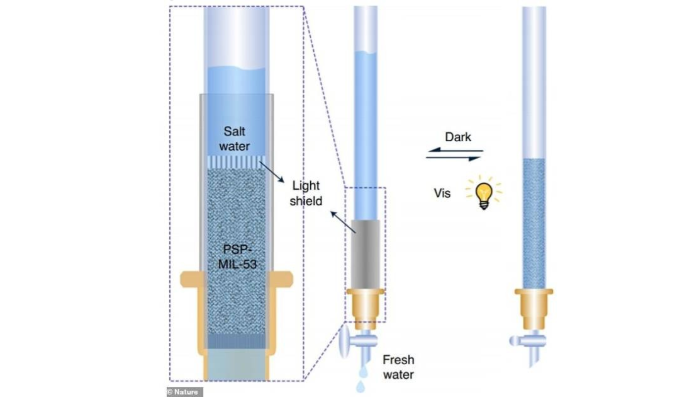 Australian researchers have developed a technology that can turn seawater safe to drink in less than 30 minutes by using only a high-tech filter and direct sunlight.

According to the Melbourne-based Monash University, the specially-designed filter is capable of generating hundreds of litres of drinkable water per day, reports Xinhua.

The technology requires only direct sunlight to purify, making the process energy-efficient, low-cost and sustainable.

Metal-organic frameworks (MOFs), a class of compounds consisting of metal ions that form a crystalline material with the largest surface area of any material known, are used in making the filters.

During the desalination process, a functionalised MOF filter firstly adsorbs salt from water, which consumes no energy, then the salt filled MOF can be put under sunlight to regenerate, taking less than four minutes, before it can absorb salt from water again.
Lead author of the research, Professor Huanting Wang from the Department of Chemical Engineering at Monash University, said desalination is a feasible option to address the pressing water shortage crisis around the world.

Desalination has been used to address escalating water shortages globally.

Due to the availability of brackish water and seawater, and because desalination processes are reliable, treated water can be integrated within existing aquatic systems with minimal health risks," Wang said.

"But thermal desalination processes by evaporation are energy-intensive, and other technologies, such as reverse osmosis, have a number of drawbacks, including high energy consumption and chemical usage in membrane cleaning and dechlorination."

With low energy consumption and no chemicals needed during the process, Wang said this highlights the durability and sustainability of this new technology for future clean water solutions.

"This study has successfully demonstrated that the photoresponsive MOFs are a promising, energy-efficient, and sustainable adsorbent for desalination," he said.