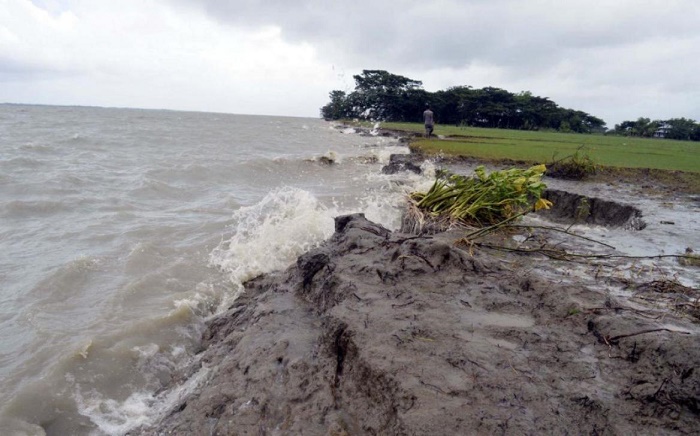 Erosion by the rivers has taken a serious turn in the country’s central and northern regions, devouring many houses and croplands with the floodwater receding.

The floodwater continued to recede across the country on Monday, but river erosion has intensified in several districts of the central and northern regions, locals said.

The flood-hit people who took shelter on high land started returning home, but they have to live in open sky as their houses had been washed away by the floodwater.

Life has started getting normal in the flood-affected areas, but flood victims are passing days in utter misery. They suffer huge losses as their croplands have been ruined by the flooding.

“The government has distributed relief among the flood victims, but the relief is not adequate. We immediately need financial assistance to rebuild our houses and start cultivation,” Abdus Salam, a flood victim in Rangpur, said.

Ariful Islam, another victim in Rajshahi said, “We hope that the flood situation will improve soon. The authorities should now give us financial assistance for rebuilding our houses.”

Local sources said that erosion by the major rivers has taken a serious turn in many areas of the country, causing untold sufferings for the flood-affected people.

A large number of houses, structures, trees and crops on vast tracts of land had been washed away by the flooding and strong current of the rivers in flood-hit districts.

Arifuzzaman Bhuiyan, executive engineer of the Flood Forecasting and Warning Centre (FFWC), said water level of the Jamuna and Padma are declining and the trend may continue for the next 24-48 hours.

“Except the Kushiyara, water level of the rivers of upper Meghna basin in the north-eastern region is declining and the trend may continue for the next 24 hours,” he added.

The FFWC also said that water level of the rivers around capital Dhaka is also falling and the trend is likely to continue for the next 48 hours.

The flood situation may improve in Sirajganj, Tangail, Natore, Manikganj, Rajbari and Faridpur districts in the next 24 hours, he added.

The flooding may also improve at the low-lying places adjacent to the capital city in the next 24 hours.

Among the 30 river points in Ganges basin, the water levels of 21 stations declined while it rose at eight points and remained stable at one point at 9:00am today.

Apart from this, the rivers were flowing below the danger level at 28 points while above the danger mark at four points this morning, FFWC sources said.

Meanwhile, the Department of Health has undertaken all-out measures to prevent any outbreak of water-borne diseases in the affected areas amid the recession of floodwater.