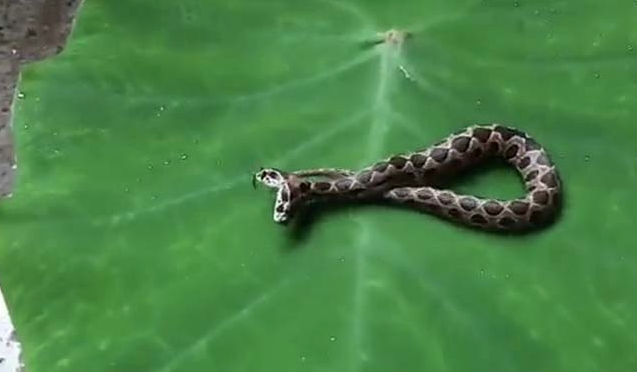 A two-headed snake was captured in Maharashtra on Thursday. The rare two-headed Russell's Viper was rescued from Kalyan's Gandhare Road area on the outskirts of Mumbai, reports Hindustan Times. It measures 11 cm and each of its twin heads come up to around 2 cm in length.

The Russell's Viper is one of the most venomous snake species found in India, and also one of the species responsible for causing the most incidents of snake bites.

According to Mumbai Live, Kalyan resident Dimple Shah spotted the twin-headed venomous baby snake on Thursday and contacted the War Rescue Foundation. Two rescuers from the foundation then arrived at the spot to rescue the rare snake.

A video of the snake was shared on Twitter by Indian Forest Services officer Susanta Nanda. "Two headed Russell's Viper rescued in Maharashtra. Genetic abnormality and hence low survival rates in the wild," wrote Mr Nanda while sharing the clip.

"The Russell's Viper is far more dangerous than most poisonous snakes because it harms you even if you survive the initial bite," he added.

The snake will be handed over to the Haffkine Institute in Parel.

Instances of snakes with two heads are rare, but not unheard of. They occur due to genetic mutations. In May this year, a wolf snake with two fully formed heads was found in Odisha.