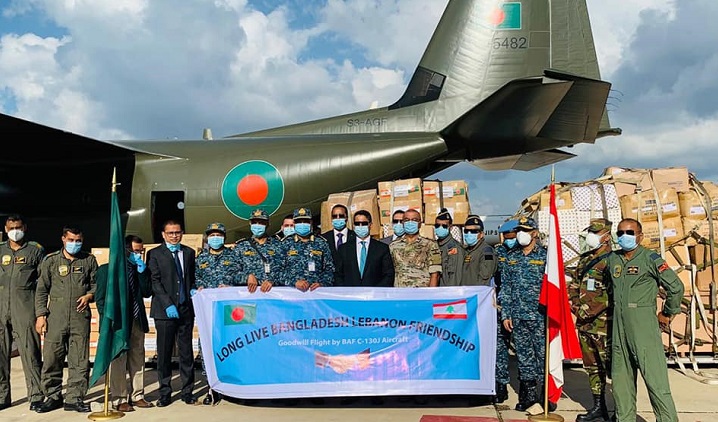 Top-ranking officials of Bangladesh Air Force (BAF) and Bangladesh Embassy in Lebanon pose for a photo after landing of the aircraft at Beirut.

A transport aircraft of Bangladesh Air Force (BAF) carrying 2 tons of medical supplies, 8 tons of relief items and 2 tons of spares landed in Beirut of Lebanon to support the victims of the recently held horrific explosion.

Emergency medical supplies, a physician and a technical team to assess the situation of the damaged naval ship led by Rear Admiral Mohammad Mozammel Haque were sent to Lebanon.

On the way back, the BAF C-130J aircraft will carry some Bangladeshi nationals living in Lebanon. The aircraft is scheduled to return home on August 12.

It is expected that the humanitarian support from Bangladesh will further strengthen the existing friendly relations between two countries.