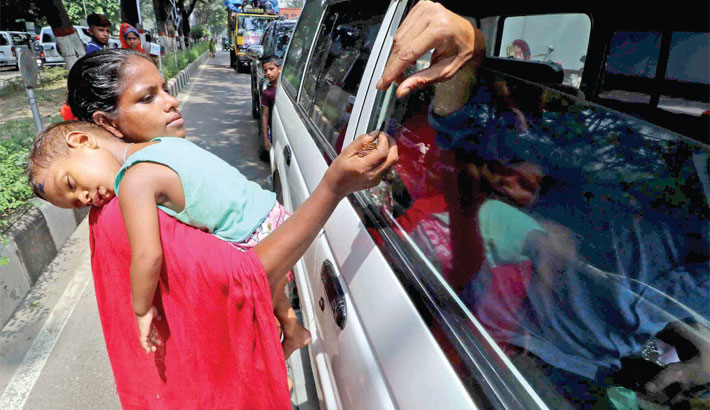 A young mother begs on a busy street in the capital with her malnourished kid in her lap without wearing face mask. The photo was shot in front of the Secretariat on Sunday. —MD NASIR UDDIN

Babies of ultra-poor parents living in makeshift slums beside the city streets and moving in crowded markets for alms without wearing mask are susceptible to coronavirus.

The incidents of keeping babies with beggar mothers are a regular phenomenon.

The babies, who have no choice, are simply exposed to the vulnerability of the deadly virus due to the act of their parents.

People of Bangladesh like elsewhere of the world are hard hit by corona. The deadly virus has not only put public health in danger but collapsed economy also.

Amid this situation, marginal and middle classes are struggling to survive. Many day-labourers and housemaids have lost their jobs following the corona pandemic.

Various agencies of the government, city corporations and affluent people continue to distribute relief materials which do not reach the doorsteps of those who badly the support.

A section of unemployed people including women and children have virtually become beggars.

The list of beggars has become long due to addition of newly created poor.

Many such beggars are not wearing masks. Besides, they hardly know about social distancing rules.

In the worst case scenario, toddlers and children are being used for the purpose of begging.

Sometimes, babies and children accompany their widowed or single mothers at the time of begging.

An investigation by the daily sun shows that a majority of such minors remain unmasked at the crowded place.

Earlier, some study report said the children are beyond corona risk. But such claim was disproved by subsequent child infection and death across the globe.

World Health Organization said parents need to prepare their kids to guard against COVID-19 after a new study showed that babies and very young children can develop severe symptoms.

A recent study showed that a number of children in China have developed severe or critical disease and one child died, said Dr. Maria Van Kerkhove, head of WHO’s emerging diseases and zoonosis unit, at a news conference on March 18.

“What we need to prepare for is the possibility that children can also experience severe disease.” In UK, a 11-year-old is among a further 917 patients to have died of corona, said a report of mail online on April 13.

A five -year-old child was Britain’s youngest coronavirus victim, reported The Sun of UK on April 4.

Los Angeles Times reported that a teenager who lived in Lancaster may be the first child to have died from the coronavirus.

On March 24, Los Angeles County health officials announced what they believed to be the first COVID-19 death in the U.S. of someone younger than 18.

Previously, a 3-year-old toddler with leukemia of the country had lost his life due to the disease.

Mir Abdur Rahman, a 3-year-old boy from Jasaldia village at Louhajang of Munshiganj, died with corona symptoms on January 27.

However, Bangladesh first confirmed coronavirus cases after three people tested positive for the infectious virus in the capital Dhaka on March 8.

Experts apprehend that corona started to infect people at the beginning of this year as the number of people died of cold diseases and breathing problem was abnormal.

Various organizations including Save the Children expressed concern about the future of children amid corona outbreak.

On June 5, an article of Unicef titled “For many in Bangladesh, staying home isn’t an option/ Children living on the streets have few safe places to go during the COVID-19 lockdowns” focused on the vulnerability of children of poor and beggar parents.

Recently, Save the Children launched a $100 million appeal to protect children from the deadly disease.

“This is the biggest global health crisis of our lifetime. As the world grapples with the coronavirus pandemic, children’s lives are being turned upside down everywhere you look. We must act immediately to help more children before it’s too late,” said the international organization.

Save the Children has launched a $100 million appeal - the biggest appeal in our 100-year history – to protect children in the world’s most deprived areas from the effects of coronavirus.

Around 4,59,000 children and mothers are in danger in South Asian countries due to the disruption of immunization, nutrition, and other vital health services caused by Covid-19, says a report of Unicef on June 23.

Around 28,000 children under five years of age could die in Bangladesh in six months as an indirect result of the Covid-19 pandemic in the worst-case scenario, said Unicef.

“But the longer-term impact of the economic crisis on children will be on a different scale entirely. Without urgent action now, Covid-19 could destroy the hopes and futures of an entire generation,” said Jean Gough, the Unicef regional director for South Asia.

In order to mitigate the impact on poorer families, he urged the governments to immediately direct more resources towards social protection schemes, including emergency universal child benefits.

Talking to daily sun, Dr ASM Alamgir, Principal Scientific Officer of IEDCR, said  the babies of the beggar mothers are suffering from malnutrition and they are more susceptible to corona than other babies.

“In Bangladesh, infection rate among children below 10 years is 3 percent. So, the babies are risky. Babies of insolvent families are more risky,” he said. He underscored the need for organized approach and health awareness to protect these children and their mothers from corona pandemic.

“The affluent people should come forward to help the women and children on the street. Market owners associations can take step to distribute masks for beggar women and their babies. Boosting health awareness is important because social distancing cannot be implemented only through the application of law.”

He also claimed that the country has seen laxity in social distancing and health awareness among people in the last couple of days.

Md Asraf Ali Khan Khasru, MP, State Minister for the Ministry of Social Welfare, said the government is distributing food items among the distressed in the capital and other parts of the country during the corona pandemic.

Apart from the government, BRAC and EU aid have introduced $7 billion project to distribute food among the slum dwellers in the capital, he said.

“Prime Minister’s Office, Ministry of Social Welfare, BRAC and EU aid are operating food assistance programme among the slum dwellers in Dhaka. Besides, the government is running food distribution in other parts of the country.” About the beggars, he said the government earlier pushed the floating poor people back to their village homes and tried to rehabilitate them but they came to back to Dhaka again.

“Some of the beggars are professional. Earlier, the government sent many of them to their natives and constructed houses for rehabilitation. But these people came back to Dhaka again and started begging.”