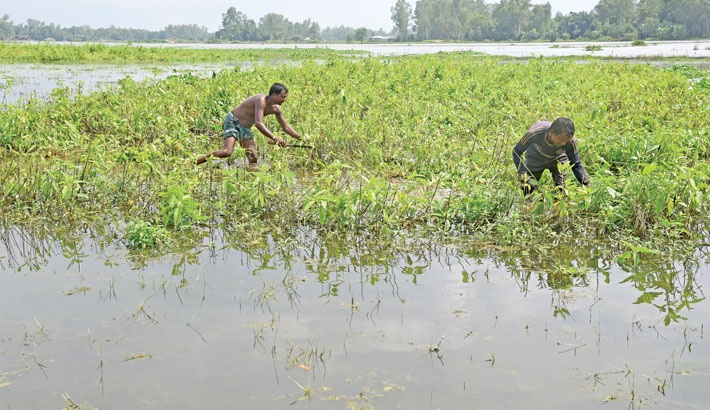 The flooding in Brahmaputra and Ganges basins improved further on Sunday as water levels of major rivers have fallen in the last couple of days.

The displaced and marooned people started returning home after further improvement in the flood situation. But, many have to live under open sky as their dwellings have been washed away by floodwaters.

Flood victims have suffered a huge financial loss as their croplands have gone under floodwaters. Now, they are seeking assistance to build their houses and plant crops again.

Arifuzzaman Bhuiyan, executive engineer of the Flood Forecasting and Warning Centre (FFWC), said water levels have started falling in the Brahmaputra, Jamuna, Ganga, Padma and Meghna basins and it will continue in the next 72-48 hours.

River water surrounding Dhaka city has been declining and it will continue for next 24 hours, he said, adding that the flood situation in Dhaka city will also improve.

The government has distributed relief among flood victims in the affected areas, but these are not adequate, many said, adding that they are seeking financial assistance to rebuild their dwellings and start cultivation.

Local sources said erosion by major rivers has taken a serious turn in many areas, causing immense sufferings for people.

A large number of houses, structures, trees and crops on vast tracts of land were washed away by floodwaters and strong current in rivers in different flood-hit areas.

The major rivers and tributaries in the Brahmaputra basin were flowing much below the danger mark at all points, the FFWC said.

Officials concerned said there is no flooding in Nilphamari, Rangpur and Lalmonirhat now, and it is improving fast in Kurigram, Gaibandha, Jamalpur, Bogura and Sirajganj. Normalcy will return there within a couple of days.

A declining trend of water level was recorded at Hardinge Bridge and Talbaria points, while remained stable at Rajshahi and Pankha point in Chapainawabganj in the last 24 hours ending 9 am on the day.

The water levels of the Ganges decreased by 5cm at Hardinge Bridge point and 3cm at Talbaria point in the morning. The Padma’s water level declined further by nine cm at Goalunda point.

Arifuzzaman Bhuiyan, said the water level of the Korotoa River receded by 27 cm at Chak Rahimpur point and 19 cm at Bogura point.

He said the river was flowing 114cm and 192cm below the danger mark at Chak Rahimpur and at Bogura respectively in the morning.

Bhuiyan said the water level of Gur River further decreased by 9cm at Singra point in Natore and the river was still flowing 43cm above the danger mark.

The Atrai River was flowing 27cm above the danger level at Baghabari point in Sirajganj with a 10cm fall afresh.

The water level of the Mohananda further receded by 8cm at Rohanpur in Chapainawabganj and 4cm at Chapainawabganj point, and the river was flowing 105cm and 102cm below the danger mark at the stations respectively.