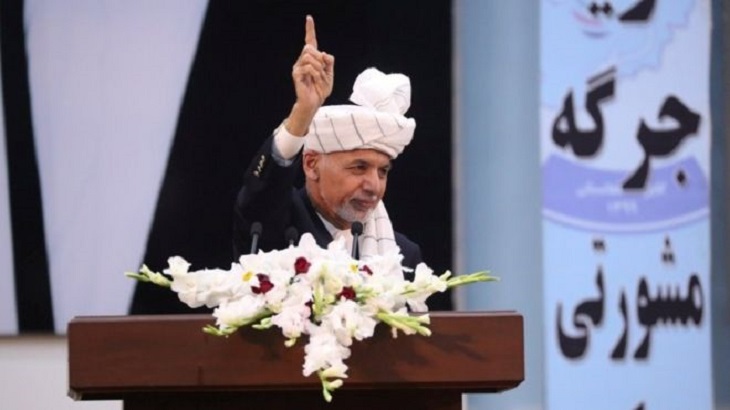 An Afghan grand assembly of elders has approved the release of 400 Taliban prisoners accused of "major" crimes.

The Loya Jirga said the decision was made to remove a barrier to peace talks between militants and the government.

The Taliban had been demanding the release of the prisoners, whose crimes include attacks on Afghans and foreigners.

It comes as the US announced its troop level in the country would drop below 5,000 by November.

The Taliban were removed from power by a US-led invasion in 2001. The group gradually regained its strength to control more territory than at any point since that time.

Earlier this year, the US and the Taliban agreed on a peace deal to end the 19-year-long conflict in Afghanistan. The deal was meant to pave the way for talks between the Afghan government and the Taliban, which had previously only agreed to talk to the US.

Negotiators for the US and the Taliban had agreed that 5,000 Taliban prisoners would be released before they entered talks with the Afghan government.

Thousands were freed - however, 400 remain in prison. About 150 of them are on death row, according to AFP.

The Loya Jirga said in a resolution that the decision to free the 400 was made in order to "remove an obstacle, allow the start of the peace process and an end of bloodshed."

The decree will now be signed by President Ashraf Ghani.

The prisoner release has been controversial among some civilians and human rights groups.

Western diplomats told Reuters news agency that negotiations between the government and the Taliban would begin in Doha this week.

A UN report in February 2019 claimed that more than 32,000 civilians have died during the 19-year war. That same year, President Ghani said more than 45,000 members of the security services had been killed since 2014.

On Saturday, US Defence Secretary Mark Draper said troop levels in Afghanistan would drop to below 5,000 by November.

In an interview with Fox News, he said the Pentagon needed to inform Congress on the plan. He added that it was also dependant on whether the US was "not threatened by terrorists coming out of Afghanistan".

US President Trump last week said he wanted to reduce troop numbers to 4,000 - 5,000 before the November presidential election.