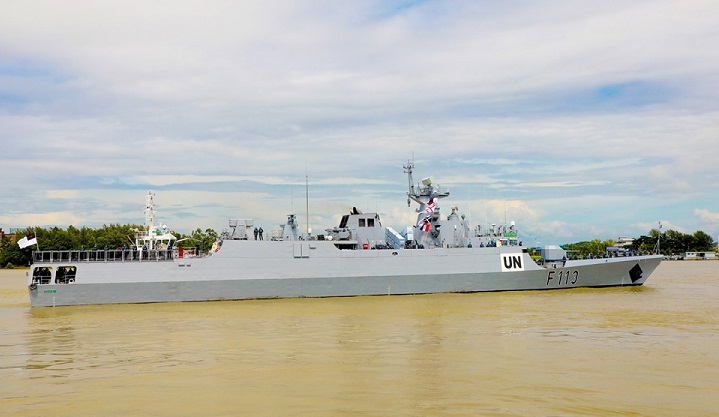 Bangladesh Navy’s warship Sangram left Chittagong Naval Jetty for Lebanon on Sunday as per the pre-planned and scheduled time to participate in the UN peacekeeping mission in Lebanon.

Among others, senior officers of the navy and family members of the sailors were present.

BNS Bijoy will hand over the responsibility to BNS Sangram after successfully completion of two-year, eight-month operation.

A total of 15 officers and 95 sailors led by Captain Faisal Mohammad Arifur Rahman Bhuiyan, Commander of the Naval Warships, left for Lebanon to join the peacekeeping mission.

Prime Minister Sheikh Hasina commissioned the BNS Sangram through a teleconference on 18 June 2020 to replace the BNS Bijoy.

It may be mentioned that Bangladesh Navy warships have been participating in the UN peacekeeping mission in Lebanon since 2010.

Navy ship has been working efficiently to prevent the infiltration of illegal weapons and ammunition into Lebanese territory.

In addition, the ship has been playing an important role in world peace by conducting maritime interdiction operations in Lebanese waters, surveillance of suspicious ships and aircraft, rescue operations on the wrecked ship and providing necessary training to Lebanese naval personnel.