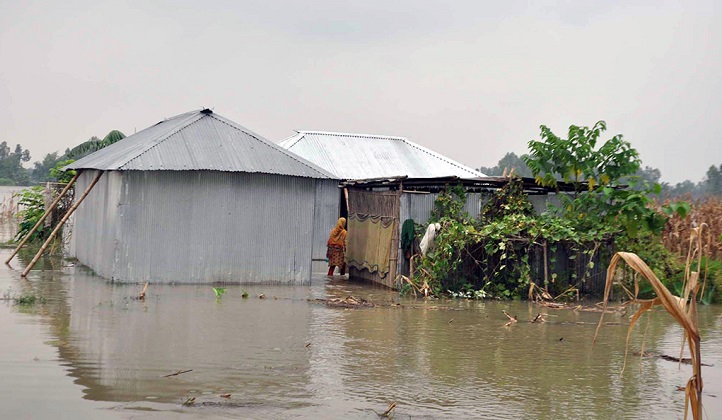 Overall flood situation is improving in the north and northeastern regions of the country while the sufferings of the people are getting worse.

The floodwater is receding significantly from the regions as the water levels in the major rivers have marked fall during the last couple of days.

The water level has started falling in the Brahmaputra, Jamuna, Ganga, Padma and Meghna basins and it will continue in the next 72-48 hours, said Arifuzzaman Bhuiyan, the executive engineer of the Flood Forecasting and Warning Centre (FFWC).

As a result, the flood situation in the northern and central regions may gradually improve and the condition is likely to become normal by the middle of August.

The northeast and southeast regions may experience flooding again by the end of the month due to heavy monsoon rains, he added.

Water level in the Ganges River decreased by one cm at Rajshahi, 3 cm at Hardinge Bridge and 1cm at Talbaria points this morning while water level in the Padma River further declined by 17 cm at Goalunda point, said Arifuzzaman Bhuiyan.

Bhuiyan also said the water level in the Gur River further decreased by 6cm at Shingra point in Natore district and the river was flowing 52 cm above the danger mark.

Of the 16 river points both in Ganges and Brahmaputra Basins, water levels are falling at 15 points, he said.

The flood-affected people of the central, northeastern, central and lower central region have been suffering due to acute scarcity of food, safe drinking water and fuel oil as the government relief is too meager to meet their requirements.

At least 161 people have so far died in the flood-related incidents. Of them, 146 drowned and 15 died from snakebite, according to sources at Health Emergency Operations Center of Director General of Health Services (DGHS).

A total of 9,988 people have been attacked with diarrhoea, 6,156 with skin disease and 3,254 with respiratory tract infection (RTI) in the flood-hit regions as of August 7, sources at the Health Emergency Operations Center said.

Meanwhile, riverbank erosion has intensified due to the strong current of water in the river.

Incidents of riverbank erosion have been reported from around 55 points in the major rivers in Kurigram, Gaibandha and Lalmonirhat districts.