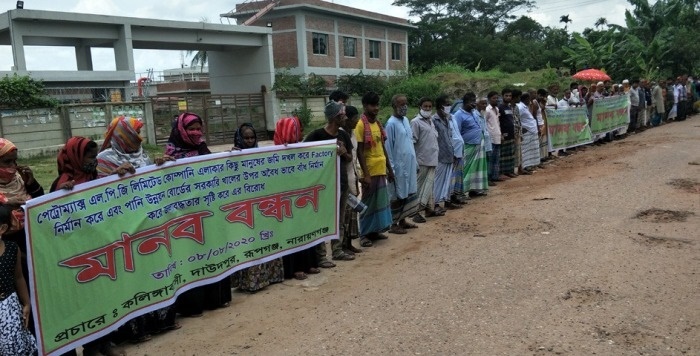 People of Kalinga area in Rupganj upazila of Narayanganj district form a human on Saturday in protest against land grabbing by Petromax LPG Ltd and demanding necessary steps to solve waterlogging problem in their locality.

Local people at Rupganj upazila in Narayanganj district on Saturday formed a human chain in protest against grabbing of land by Petromax LPG Ltd.

The human chain was formed at Kalinga area under Daudpur Union of the upazila.

According to locals, Petromax LPG Ltd, a subsidiary company of the Youth Group, is grabbing lands of the helpless people forcefully.

Hundreds of people are losing their homesteads and cultivable lands due to the greed of the land grabber.

Besides, the company is doing earth-filling work on the grabbed lands and canals, resulting in waterlogging and public sufferings in the area.

The cadres of the company have created a reign of terror and resorted to persecution of the local people to implement its evil attempt.

Aggrieved people wanted the company to pay fair price for the occupied lands and free the canals to resolve waterlogging crisis in the area.

“We are going ahead with the projects on the purchased lands. Allegation of the local people is not reasonable,” he said.