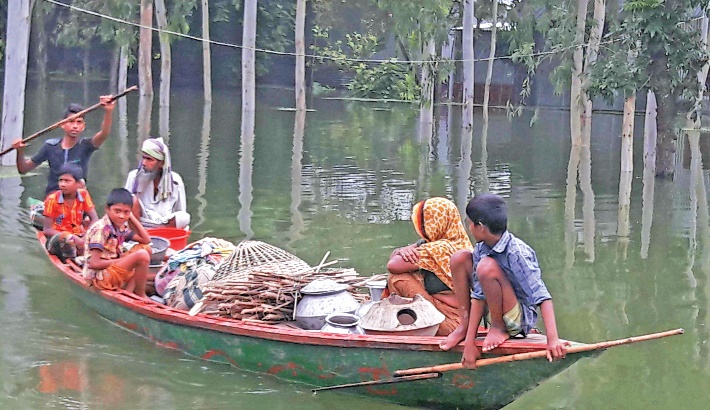 Normalcy started returning in flood-affected areas as many displaced people are returning homes following further improvement in the flood situation in the Brahmaputra basin during 24 hours till 9 am on Friday.

Bangladesh Water Development Board (BWDB) officials said water levels of major rivers marked further sharp falls to flow below the danger mark (DM) at all points as the rate of onrushing waters continued reducing from the upstream during the period.

The improving trend in the flood situation may continue with further recession in water levels of the major rivers during the next 72 hours as no monsoon rains were recorded in the basin and northeastern Indian states in the upstream during the last 24 hours.

Meanwhile, sporadic incidents of riverbank erosion have been reported from around 80 points alongside major rivers due to stronger river current with recession of floodwaters in the basin.

Water levels of the Brahmaputra marked further sharp fall by 16cm at Noonkhawa and 13cm at Chilmari while Dharla marked fall by 26cm at Kurigram and Ghaghot by 7cm at Gaibandha points during the period.

Water levels of the Jamuna also marked sharp falls by 23cm at Fulchhari, 26cm at Bahadurabad, 21cm at Sariakandi, 14cm each Kazipur and Sirajganj points.

The Brahmaputra was flowing below the DMs by 91cm at Noonkhawa and 49cm at Chilmari while Dharla by 83cm at Kurigram and Ghaghot by 30cm at Gaibandha points at 9 am today.

The Jamuna was flowing below the DM by 35cm at Fulchhari, 29cm at Bahadurabad, 7cm at Sariakandi, 18cm Kazipur and 5cm at Sirajganj points at 9am.

Chief Engineer for Rangpur Zone of BWDB Jyoti Prosad Ghosh said sporadic riverbank erosion has been reported alongside the major rivers from flood-affected areas in the zone where protection works are continuing at many places.

Talking to BSS, Executive Engineer of BWDB for its Kurigram Division Ariful Islam said riverbank protection works are continuing at some 33 vulnerable riverside points in the district.

Executive Engineer Mokhlesur Rahman for Gaibandha Division of BWDB said riverbank protection works are continuing at about 15 vulnerable points in the district.

Additional Divisional Commissioner (General) Md. Zakir Hossain said relief activities have been intensified as the displaced people are returning homes as the flood situation continues improving in all deluge-affected areas of Rangpur division.

District Relief and Rehabilitation Officer (DRRO) of the worst flood-hit Gaibandha district Moazzem Hossain said the second phase of the deluge has affected 2.50 lakh people in the district where the flood situation continues improving rapidly.

DRRO of another worst flood-affected Kurigram district Abdul Hye Sarker said more than 2.50 lakh people have been affected by the second phase of the deluge this season in the district.