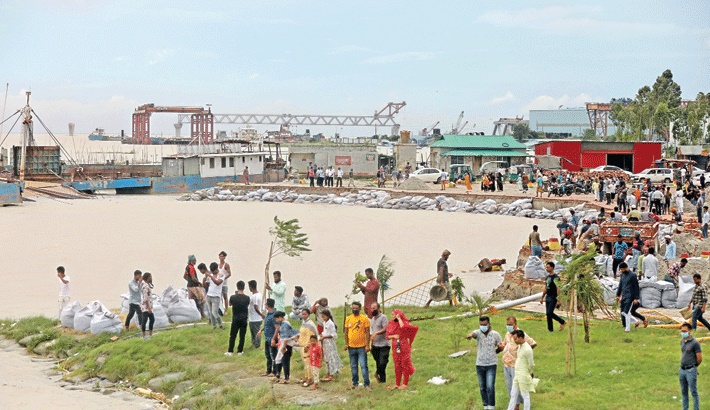 The overall flood situation in the country’s central region was aggravated further with river erosion intensified in several northern and central areas on Thursday.

Although floodwater has started to recede in the northern region, river erosion has displaced many people.

A large number of dwellings and other establishments, trees and crops on vast tracts of land have been washed away by floodwaters and strong current of rivers in many flood-hit areas.

Bangladesh Water Development Board (BWDB) officials said incidents of sporadic river erosion have been reported from around 50 points alongside major rivers in Kurigram, Gaibandha and Lalmonirhat.

Soil erosion has taken a serious turn at the places along the riverside areas.

“Water level in Brahmaputra-Jamuna river system may fall till 10th August and then start to rise. The flooding in Kurigram, Bogura, Gaibandha, Jamalpur, Sirajganj, Tangail and Manikganj is likely to improve during the next 5 days,” according to a forecast by the Flood Forecasting and Warning Center (FFWC).

“Padma River may swell steadily. Water level at Goalondo station of Rajbari, Bhagyakul station at Munshiganj and Sureshwar station at Shariatpur may fall during the next 6 days. As a result, the flood situation in these districts is likely to improve in the next 6 days.”

“Rivers around Dhaka city may remain steady. Lakhya River may rise in the next 7 days. As a result, the flood situation in the low-lying areas of the district is likely to continue for the next 7 days. Balu River at Demra, Turag at Mirpur, Dhaleshwari at Rekabi Bazar may continue to rise, said Md Arifuzzaman Bhuiyan of the FFWC.

This may result in flooding in low-lying areas of Dhaka in the next seven days, he said.

Meanwhile, the people marooned by flooding in different areas are passing days in extreme misery due to the acute crises of food and drinking water and spread of waterborne diseases.

Flood victims are desperately looking for relief materials. They rush to any boat or vehicle carrying relief goods to the flood-affected areas. The flood-hit people of the northern region have been suffering much due to acute scarcity of food, pure drinking water and fuel oil as the government’s relief is too meager to meet their needs.

Locals feared an outbreak of diarrhoea and other waterborne diseases in the flood-affected areas.