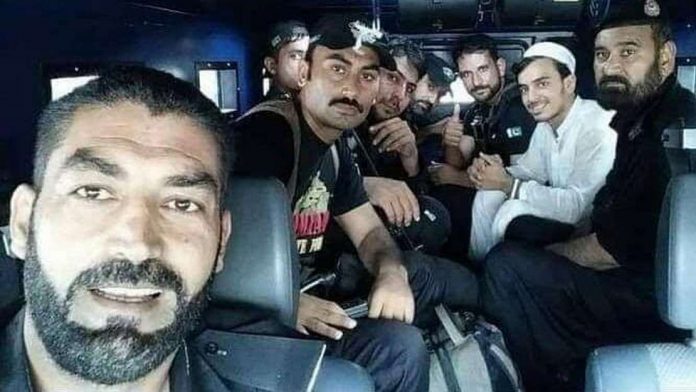 An image of Peshawar elite police squad with Faisal alias Khalid, who killed blasphemy accused Tahir Ahmad Naseem inside a courtroom last week, is doing the rounds of social media.

An image of the Peshawar elite police squad posing for a group selfie with Faisal alias Khalid, who last week killed American citizen Tahir Ahmad Naseem inside a courtroom, has been doing the rounds of social media.

The photograph has been shared by many, including some journalists and activists.

Naseem, arrested two years ago on charges of blasphemy, was standing trial in a Peshawar court.

Reacting to the image, Pakistani human rights activist Gulalai Ismail tweeted: “After lawyers taking selfies with the murderer of Tahir Ahmed Naseem, Peshawar police (Elite Force) also joined the bandwagon of making a celebrity out of a criminal involved in a first-degree murder over alleged blasphemy.”

Calling Pakistan a state where “intolerance and violent religious extremism (is) seeped into each and every institution”, Ismail said, “Not a single collective action announced by any political party or any civil society org against the murder of Naseem. Instead, those who condemned the murder, are reassuring people of their Islamic faith. They know anything more than a tweet will get them killed too (sic).”

She had earlier posted a tweet condemning lawyers clicking selfies with Khalid.

We are deeply grateful to our readers & viewers for their time, trust and subscriptions.

Quality journalism is expensive and needs readers to pay for it. Your support will define our work and ThePrint’s future.

A few other social media handles also shared the image of policemen with Khalid.

Naseem was gunned down by Khalid on 29 July. “He (Khalid) killed him (Naseem) for having committed blasphemy,” police officer Ahmed has been quoted as saying.

Naseem had been in Peshawar police’s custody since 2018 for having violated sections 295-A, 295-B and 295-C of the Pakistani Penal Code. He was facing charges for allegedly claiming to be a prophet — a violation of “Pakistan’s strict blasphemy laws that can carry a death penalty“.

His murder was condemned by the US Commission on International Freedom. “Pakistan’s blasphemy laws are indefensible to begin with, but it is outrageous beyond belief that the Pakistani government was incapable of keeping an individual from being murdered within a court of law for his faith, and a US citizen, nonetheless,” said Commissioner Johnnie Moore.

At least 77 killed in Pakistan over blasphemy charges

Soon after the killing, thousands in Peshawar had taken to the streets in support of Khalid. The protesters called for the accused’s “immediate release from jail” and said Nassem was killed because the government was “too slow in prosecuting blasphemy cases”.

While no one has been executed for blasphemy by Pakistan so far, accusations have often led to violent attacks. There have been numerous reports of extrajudicial killings in the past few years.

At least 77 people — including “singers, teachers deemed to be advocating ‘un-Islamic’ practices, and members of the persecuted Ahmadi sect” — have been killed in Pakistan since 1990 for violating its blasphemy law, according to a report in Al Jazeera.