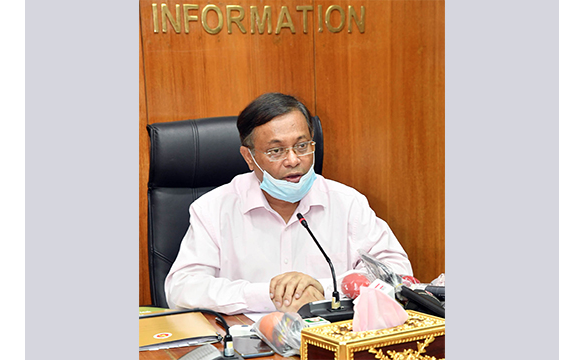 Sounding a note of strong warning against the misuse of social media platforms, Information Minister Dr Hasan Mahmud said the service providers of social media outlets could in no way avoid the liability of misusing their platforms.

“Social media is now a reality across the globe . . . But, we see that some create unstable situation through misusing the platforms in our country and other countries as well. So, the service providers could not avoid the liability in this regard,” he added.

The information minister made the comments while unveiling the cover of the book titled ‘Sheikh Hasina o GhureDaranor Bangladesh’ at the meeting room of his ministry at Secretariat.

Hasan said nowadays the people don’t spend as much time on traditional media outlets as they do on social media. But, sometimes the platforms are being used for character assassination of many and also spread of fake news, he added.

“As per the law, a newspaper or television authority is liable if they do this kind of work. Then why the social media authority shouldn’t be made responsible for such work?, he questioned.

He said the social media service providers must have to shoulder the responsibilitiesas they couldn’t avoid the liability. The service providers are liable, if anyone commits immoral, anti-state activity and try to go for character assassination of others by using social media platforms, said Hasan, also Awami League joint general secretary.

The information minister said they are earning crores of money through businesses. “But, they are not paying tax. Besides, some try to create instability using their platforms, it cannot happen,” he added.

For this, he said, many countries like the USA, the UK, European nations and also India have either formed or are forming new act to take actions against the offenders. So, it must be done in Bangladesh also, he added.

Besides, he said the telecommunication ministry is trying for a new act if needed and the ministry is working to this end.

Replying to a query on a comment of BNP secretary general Mirza Fakhrul Islam Alamgir, the information minister said it is BNP leaders, not Awami League, who don’t get relief without violence. He (Fakhrul) has mistakenly named Awami League, he added.

Hasan said the countrymen witnessed their violence like killing people, drivers, and students with petrol bombs. “I don’t know of any political party in the contemporary world which did this in the name of politics,” he said.

The information minister said whenever they (BNP) held a rally during the last 11 and a half years, they carried out violence centring that rally.Besides, attacks on law enforcement agencies were carried out and such acts amply prove that they (BNP) do not get relief without violence, he said.

Thanking editor of the book Shamim Ahmed, the information minister said development issues under the leadership of Bangabandhu’s daughter and Prime Minister Sheikh Hasina have been highlighted in the book.

He said the country is not only turned around under the magical leadership of the Premier, Bangladesh has been established as a role model for development before the world.

Hasan said the country is now passing through the month of mourning. “Father of the Nation Bangabandhu Sheikh Mujibur Rahman had a dream to make the country a developed one. But, he was killed brutally only after three and a half years of independence. Now, Bangladesh is moving ahead indomitably under his (Bangabandhu) worthy daughter Prime Minister Sheikh Hasina,” he said.

But, the information minister went on saying that, it is regretful that some people behave like blind and deaf despite having eyes and ears pretending not witnessing the development.

Hasan hoped that they would come out from such behaviour and said, “We will move ahead the country together.”