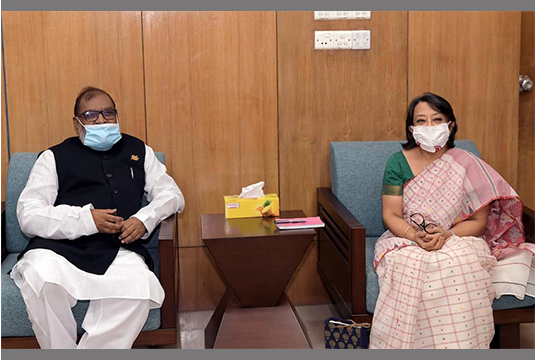 Liberation War Affairs Minister AKM Mozammel Haque said Bangladesh is constructing monuments in memory of the martyrs of Indian allied forces in the 1971 Liberation War on the occasion of the 50 years of independence.

He said this when outgoing Indian High Commissioner to Bangladesh Riva Ganguly Das paid her farewell call on him at his ministry office here. Liberation War Affairs Secretary Tapan Kanti Ghosh was present on the occasion.

They hoped that relations between the two neighboring countries would be stronger further in the days to come.

The minister recalled with gratitude the cooperation of Indian government and its people extended to Bangladesh during the Liberation War.

The Indian high commissioner said Bangladesh and India are tested friends. Some people are out to spread misleading information purposely to worsen the relations between the two next-door neighbours but the Bangladesh-India ties are not so fragile, she said.

Riva said the two countries have done many bilateral works in the last several years as Bangladesh and India are working as development partners while enclaves, maritime boundary and other issues have also been resolved during that period.

She requested the minister for taking up initiatives for translating the books on the Liberation War in Hindi.

Riva expressed her country’s willingness to become a part of golden jubilee celebration of Bangladesh’s independence in 2021 with its people.

Mozammel Haque congratulated Riva on her next posting as the secretary of Indian External Affairs Ministry and extended best wishes to her, saying the relations between the two nations will reach a different dimension during her tenure as the external affairs secretary.