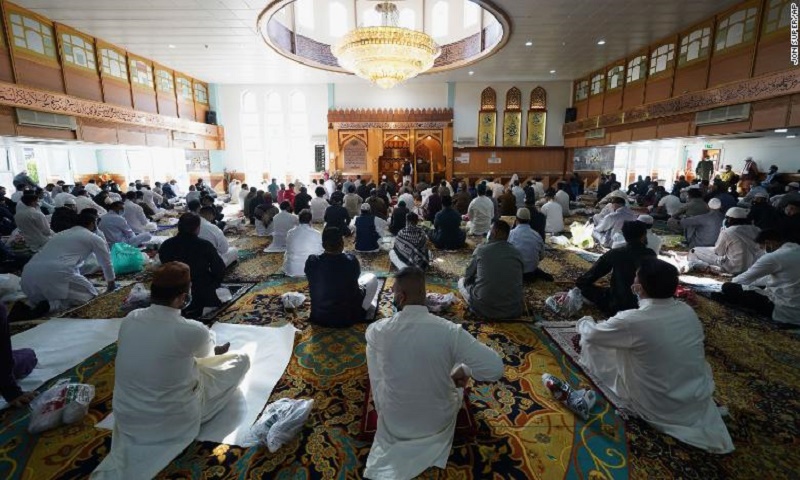 Coronavirus conspiracy theorists have spread baseless rumors online -- frequently targeting minorities -- since the beginning of the pandemic. In England the latest wave of vitriol criticizes Muslims, blaming them for spreading Covid-19.

Muslims were caught off guard last week, when the UK government suddenly announced local lockdowns in a slew of areas in northern England where cases have spiked. The announcement came just hours before Eid al-Adha, one of the holiest festivals in Islam.

The affected areas included Greater Manchester, Burnley, Blackburn with Darwen, Bradford and Leicester -- all places with a significant Islamic population according to the Muslim Council of Britain (MCB).

The restrictions -- published late last Thursday evening -- banned people in the named areas from mixing with other households.

Local politicians and Muslim leaders criticized the timing of the announcement.

A volunteer uses hand sanitizer as he enters Minhaj-ul-Quran Mosque in London on July 31.

The government "have done it on the eve of Eid," leading people to think "it must be the Muslim community's fault," Akbar said. "You see how people would have come to the assumption. [The government] have done it without thinking but of course, they're highlighting a particular demographic. And people are angry and now that anger is focused on a particular community."

A Downing Street spokesperson said in a statement to CNN: "Decisions on lockdowns are based solely on scientific advice and the latest data. Where there are local outbreaks, our priority will remain taking whatever steps are necessary to protect people."

Akbar also criticized Craig Whittaker, a Conservative MP who suggested that England's ethnic minorities were not adhering to pandemic guidelines.

"What I have seen in my constituency is that we have areas of our community ... that are just not taking the pandemic seriously enough," Whittaker said Friday, when asked about the local lockdowns during an interview with LBC radio.

When asked if he was talking about the Muslim population, Whittaker replied: "Of course."

"If you look at the areas where we've seen rises and cases the vast majority -- not, by any stretch of the imagination, all areas -- but it is the BAME [Black, Asian, and minority ethnic] communities that are not taking it seriously enough," he added.

Whittaker's comments were met with an outcry and UK Prime Minister Boris Johnson was asked about them at a press briefing on Friday.

The British leader did not condemn the MP, and said: "Well, I think it's up to all of us in government to make sure that the message is being heard loud and clear by everybody across the country, and to make sure that everybody is complying with the guidance."

This week, the Downing Street spokesperson told CNN: "At Friday's press conference the Prime Minister apologized to all those who could not celebrate Eid in the way they had wished, and thanked the work of mosques and imams in getting the message out about the importance of following safety guidance.

"And he set out in his Eid message that he is hugely grateful to the Muslim community for their efforts and sacrifices throughout this pandemic."

Tell MAMA, a group which monitors anti-Muslim incidents in the UK, has called on Whittaker to apologize for his comments.

"To single out one community this way is wholly wrong, stigmatizing and unbecoming of an MP," the group said in a statement.

Following the controversy, Whittaker said his evidence was based on data from local officials at Calderdale Council in West Yorkshire.

"Calderdale Council has not only identified a causal correlation between the locations of a high concentration of our ethnic Asian residents and that of COVID 19 infections, but has also formed the opinion that behaviour in these areas needs to be addressed through engagement in order to reduce the infection rate in these communities," Whittaker said in a statement on his website.

"In an age where authenticity is a behaviour scarcely exhibited by public figures, I am glad that I have chosen open, honest and frank discussion over political expediency and ... I make no apology for my comments," he added.

Tell MAMA director Iman Atta told CNN that far-right extremists had been blaming Muslims for the pandemic since the beginning of the UK's lockdown in March.

"In March, April, May, we saw a lot of conspiracy theories floating around," she said. "The far right were sharing photos of Muslims congregating and flouting the rules at mosques which were, in reality, shut down and not functioning. The photos were from last year," she said.

"And they have spread rumors online about how BAME communities are the ones spreading the virus, so [people] should not be interacting with them."

Atta's findings are echoed by those of the Muslim Council of Britain (MCB), which represents several UK mosques and Muslim organizations.

Earlier in the lockdown "there were theories spreading that Muslims would gather secretly during Ramadan, that mosques were secretly open -- none of that was true and there was no evidence," Zainab Gulamali, a spokesperson for the organization, told CNN.

Gulamali added that she was disappointed that Johnson and his Conservative Party colleagues had failed to condemn Whittaker's comments on BAME people.

Johnson himself has repeatedly been accused of Islamophobia. He drew sharp rebukes from Muslim communities in 2018 over an article he wrote about Muslim women wearing burqas. The politician said women who wore the veil resembled "letter boxes" and "bank robbers."

He later offered a partial apology, saying: "In so far as my words have given offense over the last twenty or thirty years when I've been a journalist and people have taken those words out of my articles and escalated them, of course, I am sorry for the offense they have caused."

Crime figures suggest that the UK has become a more hostile place for Muslims in recent years. Despite accounting for less than 5% of the UK's 66 million-strong population, 52% of religious hate crime offenses committed in England and Wales between 2017 and 2018 targeted Muslims.

Much of the recent blame placed on Muslims appears to be driven by the fact that Covid-19 has hit the country's ethnic minorities hard.

According to Public Health England (PHE), those of Bangladeshi heritage who tested positive for coronavirus were twice as likely to die as their white counterparts. PHE found that the discrepancy was caused by a complex of range of factors, including the fact that BAME people were more likely to live in overcrowded and urban areas, and to work in jobs that put them at risk of catching Covid-19.

People wearing face masks have their temperatures checked before being allowed to go into Manchester Central Mosque on July 31.

In June, an academic paper considered by the government's scientific advisers warned that an earlier local lockdown in the city of Leicester had caused a rise in racial tension. The city has a large British Asian population.

"There is extensive racist commentary on social media," the researchers wrote. "Videos have also been circulated on social media showing the South Asian community flouting social distancing in an attempt to stir conflict."

"We don't want to sweep under the carpet the issues that [Muslim communities] do face," Rabnawaz Akbar said.

"A lot of people live in densely-populated terraced housing," he said, explaining that many Muslims "live with their parents or their grandparents, so you have multigenerational households. A lot of people work in low income and frontline jobs -- they're taxi drivers or health care [workers] ... they're inevitably going to be at risk of catching the virus."

"But rather than blame them, the solution is that local and central government should work with the communities to take extra precautions," he said.

Muslims are far from alone in shouldering increased racial resentment during the Covid-19 crisis.

Coronavirus has fueled xenophobia against those of East Asian descent worldwide, and lockdown measures have triggered an explosion of online anti-Semitic hate incidents.

For many minorities the new threat of the pandemic has only intensified the age-old danger of bigotry.