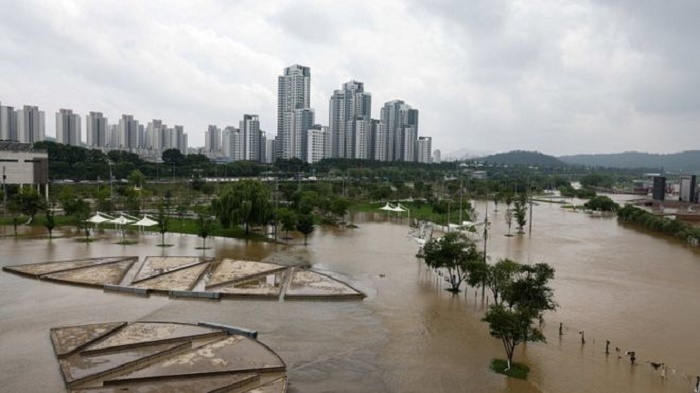 At least 15 people have died and more than 1,500 have been forced from their homes after torrential rain triggered floods and landslides in South Korea.

The rescue effort is being complicated by coronavirus restrictions.

There are fears that crowded shelters could spread the virus.

The interior ministry said efforts were being stepped up to keep displaced people in temporary shelters - mainly gyms and community shelters - distanced from each other.

Fabric screens are separating families and individuals and beds are being spaced apart to encourage social distancing, they said.

On Wednesday, Prime Minister Chung Sye-kyun urged officials to declare Gyeonggi and Chungcheong provinces as special disaster zones. The move would enable them to receive extra aid from the national government.

Weeks of rain have left vast swathes of farmland under water. In the capital, Seoul, the swollen Han river has flooded motorways and bridges.

About 1,300 houses are reported to have been submerged or buried in landslides across the country, Yonhap news agency reported, while nearly 1,000 roads and bridges have also been damaged.

At one shelter in the city of Anseong, in Gyeonggi province, 83-year-old Kwon Cha-soon said she had lost everything when a landslide struck her home.

"There isn't a single plate ... It's an empty house," she said. "All my pots and garlic jars have been swept away."

In a bid to help inundated areas, the floodgates at the Soyang River Dam in Chuncheon, Gangwon Province, have been opened for the first time in the three years, Yonhap added.

Meanwhile, North Korean state media has also warned of "torrential rain". Although it gave no details, the prospect of floods during the summer harvest season has raised fears for the secretive country's food supply.

North Korea has struggled for decades with food production. The nation suffered a famine in the 1990s which is thought to have killed hundreds of thousands.

Last year millions of North Koreans were forced to rely on meagre rations after the nation's worst harvest in a decade, according to the UN.