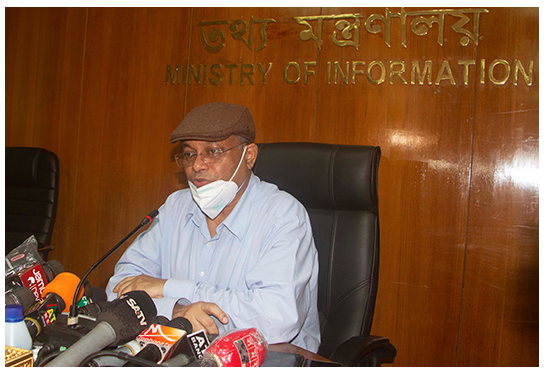 “Sheikh Kamal Bhai was killed brutally along with his father Bangabandhu, mother Bangamata and most of his family members on the fateful night of August 15 in 1975.This is our prayer on his birthday that the politics of killing should be stopped forever in Bangladesh,” he said.

The information minister made the comments while exchanging views with journalists after Eid at the meeting room of his ministry at Secretariat in the capital.

Hasan said Shaheed Sheikh Kamal was a great sports organizer in the country who pioneered modern football in post-independent Bangladesh and established the Abahani Club. “He (Sheikh Kamal) was also a cultural personality and used to play sitar, sing songs and play cricket. In his death, the country has lost a sports organizer, athlete and cultural-minded person with huge potentials”, he added.

During the meeting, the information minister greeted the countrymen on the occasion of Eid festival and said, “I would like to congratulate the people of the country for celebrating the Eid without any hassle amid the Coronavirus pandemic and flood situation.”

He said the lists of the online version of daily newspapers would be published later.

The information minister said names of many established online news portals may not appear in the list that was published recently. “But, there are no negative reports against those portals. Actually, we didn’t get reports about those news portals till now. So, there is reason for worry and disappointment. Registrations would be given in phases after getting no objection reports. This is a continuous process,” said Hasan, also Awami League joint general secretary.

About the government’s step on the OTT (Over the Top) platform issue, the information minister said an inter-ministerial committee has been formed to give a report to look into how it is being conducted in the country and how it comes under tax net and what needs to be done to comply with the country’s laws, regulations and culture.

The committee comprised representatives of finance ministry, posts and telecommunications ministry, BTRC and Bangladesh Bank and an expert lawyer. The Information Ministry leads the committee.

He said the providers are earning crores of money from the country, without paying any tax. Tax must be given, he added.

Besides, the information minister said the government would take steps to fine those service providers like other countries as some people use the platforms like facebook, twitter or youtube for creating anarchy in the society and fake news. “We are discussing on this issue. New act will be made if needed,” he added.

In the meeting, Hasan congratulated the newly appointed Chattogram City Corporation Administrator Khorshed Alam Sujon and said, “I would like to extend my thanks to the Prime Minister as she appointed an honest politician. He (Sujon) was involved in politics since his student life and he worked like a field-level activist. He is also a respected person. I think, he (Sujon) would lead the city corporation properly during the crisis period,” he added.

In this regard, Hasan expressed his gratitude to Prime Minister Sheikh Hasina.