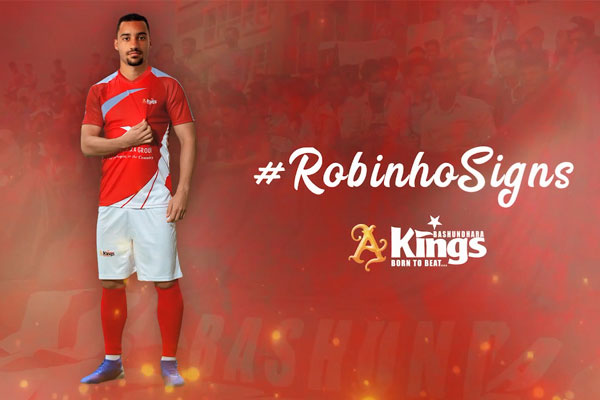 “Brazil, known for being the home of football superstars, sends us another gem -- Robson Azevedo da Silva Robinho --the latest recruit of Bashundhara Kings. We have reached an agreement with historical Brazilian Football Club Fluminense FC for a season-long loan deal. This magnificent "winger" took the world by storm netting 6 goals in Brazilian Championship. His goals immediately became a talk of the football world for their merit, especially the one he scored against São José. UoL and ESPN Brazil featured this goal in their headlines,” stated the post.

“Magical dribbling skill coupled with speed like lightening made Robson Azevedo da Silva Robinho a man of the moment in the football world. Let's get ready to cheer for the sensational Robinho from the top of our lung!” urged the post

In August 2017, Fluminense announced the hiring of Robson Azevedo da Silva, Robinho ex-Atibaia. The player defended Figueirense for Series B of the Brazilian Championship after leaving Falcão after Series A-3 of the Paulista Championship.

Fluminense paid 2 million euros (R $ 7.4 million) for 50% of the acquired rights of the 22-year-old. He was signed for four seasons. Robinho, the winger, who played more as a midfielder at Atibaia, has a lot of speed, strength, creativity and decision-making power. It was the highlight of Atibaia in the dispute for Series A-3 of the Paulista Championship. Top scorer with six goals, he scored a great goal against São José.

Coming from the left, he cut two markers, dribbled the goalkeeper and kicked into the net. The goal gained national prominence, appeared on the portal Uol and on ESPN Brasil.

Born in the city of São Caetano do Sul (SP), he played a good part of the championship on the left side of the 4-2-3-1 armed by Atibaia in the final stage of the championship. Before playing for Falcão, he played for Confiança (SE) in Serie C 2016. Acting for Figueirense in Serie B, loaned by Atibaia after Serie A-3, he was one of the highlights of the competition, scored seven goals, with two assists, in the competition and played for 18 matches.

Even with the club in 18th place, B. Robinho was an indication of Flu's scout, inside the club they believe that the player has a style similar to Richarlison's, recently hired by Watford F.C.