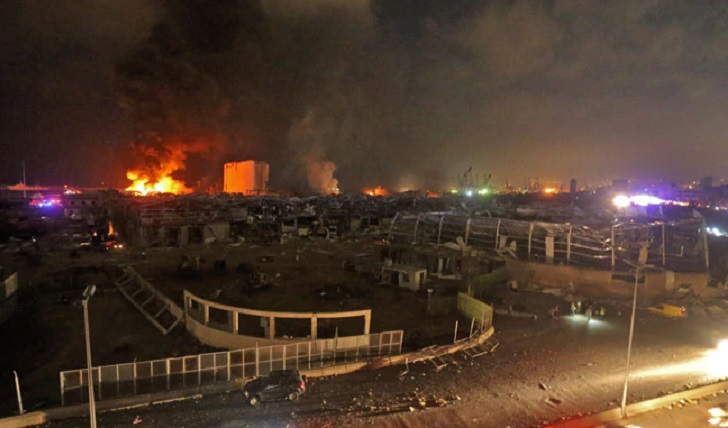 At least four Bangladeshi citizens were killed and 21 members of Bangladesh Navy injured in a massive explosion that rocked Lebanon's capital Beirut on Tuesday.

The Embassy also urged all to inform it through its hotline number if they come to know of any more casualties.

Some 1,50,000 Bangladesh nationals work in a number of sectors in Lebanon.

He said Bangladesh stands ready to support in any ways possible.

"Our thoughts and prayers for our brothers and sisters in Beirut affected by the massive explosions," he tweeted.

He said the Ministry of Foreign Affairs and Expatriates Welfare and Overseas Employment Ministry are giving necessary directives on treatment, financial support to Bangladeshis and other issues.

Referring to his telephone conversation with Foreign Minister Dr AK Abdul Momen said the relations with Lebanon will further be strengthened if any kind support from Bangladesh is sent to Lebanon now.

The Ambassador said the image of Bangladesh to Lebanon will also be brightened.

Investigators began searching the wreckage of Beirut’s port Wednesday for clues to the cause of the massive explosion that ripped across the Lebanese capital as the government ordered port officials put under house arrest, reports AP.

International aid flights began to arrive, as Lebanon’s leaders struggled to deal with the aftermath of Tuesday’s blast, crippled by an economic crisis and facing a public where many already blame chronic mismanagement and corruption among the ruling elite for the disaster.

The explosion at the port killed at least 100 people and wounded thousands. Hospitals were overwhelmed — one that was damaged in the blast had to evacuate all its patients to a nearby field for treatment.

Buildings were damaged for miles around the city, and Beirut’s governor said Wednesday that hundreds of thousands might not be able to return to their homes for two or three months.

The Bangladesh Navy personnel were on duty under the Maritime Task Force (MTF) deployed as part of the United Nations Peacekeeping Mission.

The condition of Harun-Or-Rashid (senior warrant officer) has been described as critical. He is undergoing treatment at American University of Beirut Medical Centre, the ISPR said in a press release on Wednesday.

The other victims were taken to Hamoud Hospital after they were given first aid under the supervision of United Nations Interim Force In Lebanon (UNIFIL).

All the victims are crew members of Bangladesh Navy's ship 'Bijoy’.

The authorities concerned are now assessing the losses caused by the explosion and the Head of Mission and Force Commander and Maritime Taskfoce Commander of UNIFIL are supervising it closely.

The warship of Bangladesh Navy has been participating in United Nations Peacekeeping Mission in Lebanon since 2010.

Bangladesh Navy had 110 members deployed in the UN peacekeeping mission in Beirut BANCON-8 in 2018. Now they are serving as BANCON-10 Contingent from July 8, 2019.

Meanwhile, US Ambassador in Dhaka Earl Miller said in a global community each tragic event has far reaching effects.

"My thoughts go out to everyone impacted by the explosions in Beirut, including the injured Bangladesh Navy crewmembers of the BNS Bijoy and their families," he tweeted.

An official with the Lebanese Red Cross said at least 100 people were killed and more than 4,000 were wounded.