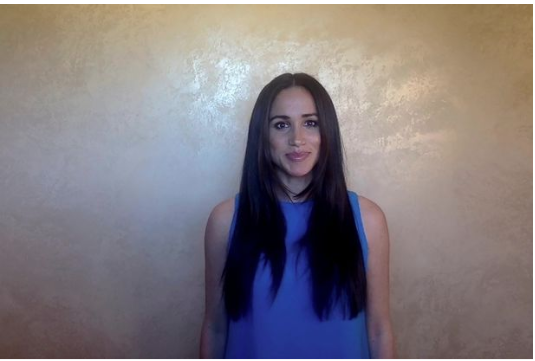 Meghan Markle showed off a gorgeous a hairstyle when she delivered her inspirational message about feminism for recent virtual engagement.

During her short stint in the royal family, Meghan became known for her messy bun - a very different look than we were used to seeing from members of The Firm.

While she often did her own hair and make up, hairdresser George Northwood was by her side during her time in the royal spotlight - and he's now given his thoughts on her new do.

He believes her new hair is a her making a statement about how she's started a new chapter in her life - and highlights that she no longer has to follow protocol.

He told the Telegraph: "She's making a statement with hair that long - it represents strength and a sense that she's really got everything sorted. This straighter, longer hairstyle marks a new chapter in her life without such strict protocols."
While many people believe she's had extensions put in, George says that isn't the case and says it's all her real hair.

Reflecting back on his time working with Meghan, he says they knew royal life meant things needed to be structured but they wanted something as relaxed as possible.

He said: "We decided to create a more undone look to balance out the formal dress code, often including soft tendrils that ultimately became her signature messy bun.
"Whereas now, she can take a more relaxed approach to how she dresses, therefore this sleeker blow-dried hairstyle works beautifully - it's casual but still polished and appropriate for her new life."

Many royal fans believe her speech to the Girl Up 2020 Leadership Summit also included several digs at her royal in-laws.

In her pre-recorded message, which she filmed at her new LA home, where she has spent lockdown with Prince Harry and Archie, she referenced the treatment by “those in the corridors of power”.
The 38-year-old said: "I want to share something with you.

“It’s that those in the halls and corridors and places of power, from lawmakers and world leaders to executives, all of those people, they depend on you more than you will ever depend on them.

“And here’s the thing: they know this.

“They know that all of you, at a younger age than any modern comparison, are setting the tone for an equitable humanity. Not figuratively, literally.
“This is a humanity that desperately needs you. To push it, to push us, forcefully in a more inclusive, more just, and more empathetic direction.

“To not only frame the debate, but be in charge of the debate—on racial justice, gender, climate change, mental health and wellbeing, on civic engagement, on public service, on so much more.

“That’s the work you’re already out there doing.”