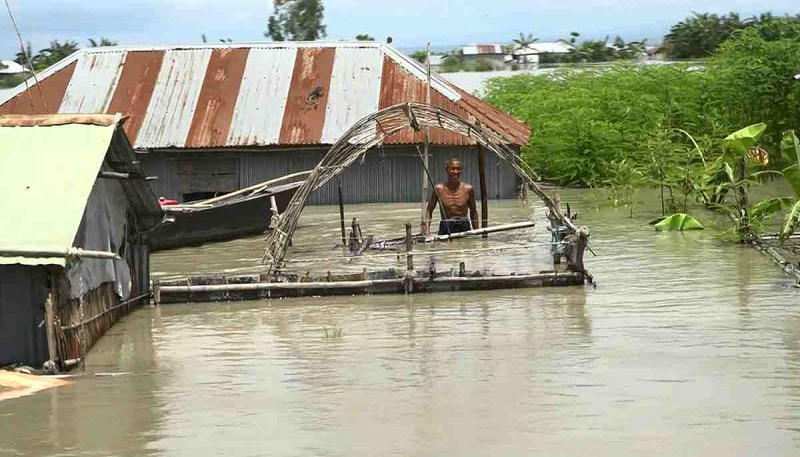 The flood situation improved further with sharp fall in water levels of major rivers in eight northern districts in the Brahmaputra basin during the last 24 hours till 9 am Tuesday.

The improving trend in the flood situation might continue in the basin during the next 72 hours paving the way for the displaced people to start returning to their houses.

Meanwhile, sporadic incidents of riverbank erosion have been reported from several points alongside the Dharla, Dudhkumar, Teesta, Brahmaputra, Ghaghot and Jamuna rivers due to stronger river current with recession of floodwaters.

Water levels of the Brahmaputra marked fall by 19cm at Noonkhawa and 15cm at Chilmari while Dharla marked fall by 29cm at Kurigram and Ghaghot by another 19cm at Gaibandha points during the period.

Water levels of the Jamuna marked sharp fall by 20cm at Fulchhari, 14cm at Bahadurabad, 12cm each at Sariakandi and Kazipur and 9cm at Sirajganj points during the period.

The Brahmaputra was still flowing above the DM by 4cm at Chilmari while Dharla by 10cm at Kurigram and Ghaghot by 5cm at Gaibandha points at 9 am today.

“However, water level of the Teesta marked a rise by 2cm at Dalia point in Nilphamari and was flowing 28cm below the DM there at 9 am today,” said Executive Engineer of the Teesta Barrage Project (TBP) Division of BWDB M Rabiul Islam.

Chief Engineer for Rangpur Zone of BWDB Jyoti Prosad Ghosh said sporadic riverbank erosion has been reported alongside major rivers from Lalmonirhat, Kurigram, Gaibandha and other areas and protection works are continuing at most places.

“The district administrations are ensuring proper distribution of relief goods, baby foods, animal fodders and cash money among the flood-hit people,” he said, adding that the government continues allocating more rice and money frequently for the purpose.

Talking to BSS, District Relief and Rehabilitation Officer (DRRO) of Gaibandha Moazzem Hossain said the second phase of the deluge has affected 2.50 lakh people in the district where the flood situation continues improving now.

“We are distributing 440 tonnes of rice, Taka eight lakh, 6,650 packets of dry foods, Taka four lakh for baby foods and Taka nine lakh for animal fodders continues among flood-hit people in full swing in the district,” he added.

DRRO of Kurigram Abdul Hye Sarker said more than 2.50 lakh people have been affected by the second phase of the deluge in the district.

The district administrations concerned have also intensified relief activities in other flood-affected northern districts in the basin.