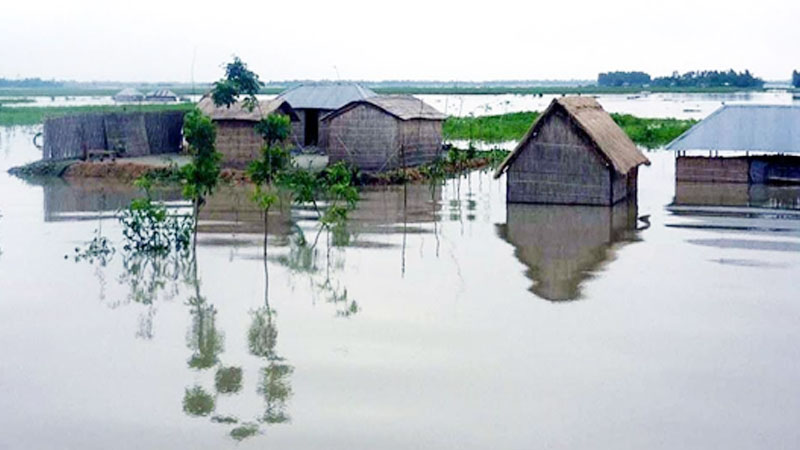 The flood situation started improving as water levels of major rivers marked fall amid incidents of sporadic riverbank erosion at places in the last 24 hours ending at 9am on Monday in the Brahmaputra basin.

Talking to BSS, Executive Engineer of BWDB for its Kurigram and Lalmonirhat divisions Ariful Islam said riverbank protection works are continuing at vulnerable points in these districts where the flood situation started improving from today.

Executive Engineer for BWDB’s Gaibandha division Mokhlesur Rahman the flood situation marked improvement during the last 24 hours as water levels of major rivers are falling at all monitoring points in the district.

“Riverbank protection works are being conducted at several points and will begin at some other vulnerable points with recession of floodwaters in the zone,” Ghosh added.

Water levels of the Dharla marked fall by 5cm at Kurigram and Ghagot by 5cm at Gaibandha and Brahmaputra by 13cm at Noonkhawa and 19cm at Chilmari points during the last 24 hours.

Besides, water levels of the Jamuna marked fall by 1cm at Fulchhari, 3cm at Bahadurabad and 1cm at Sariakandi while rose by 2cm at Kazipur and 1cm at Sirajganj points during the period till 9 am today.

The Jamuna was flowing above the DMs by 47cm at Fulchhari, 53cm at Bahadurabad, 60cm at Sariakandi, 34cm at Kazipur and 39cm at Sirajganj points at 9 am today.

Talking to BSS, District Relief and Rehabilitation Officer (DRRO) of Kurigram Abdul Hye Sarker said more than 2.50 lakh people of 62,630 families have been affected by the second phase of the deluge in the district.

Gaibandha DRRO Moazzem Hossain told BSS that the second phase of the flood has affected over 2.50 lakh people of more than 60,000 families in the district where the flood situation stared improving from today.

Similarly, the district administrations have intensified relief activities in flood-affected areas of other northern districts in the Brahmaputra basin.