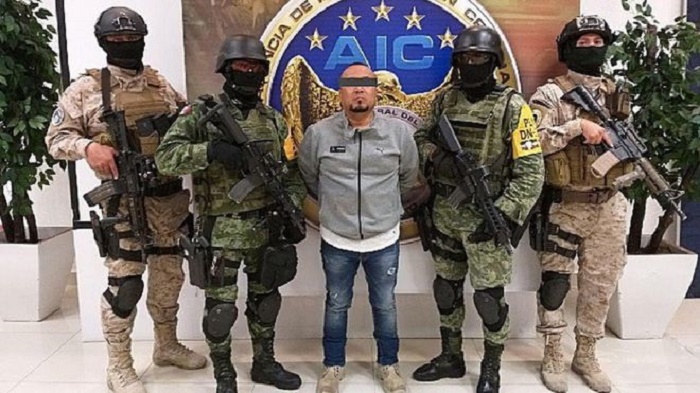 Mexican security forces have seized the head of a criminal gang specialising in stealing fuel from pipelines in the central state of Guanajuato.

José Antonio Yépez, better-known as El Marro - or The Sledgehammer - was one of the most wanted men in the country.

Mexican police had been closing in on him in recent months and had taken his mother and sister into custody.

Their arrests prompted him to release a bizarre, tearful video last month, declaring war on the security forces.

The women have since been released.

Police arrested the suspect in an early morning raid on Sunday on two houses in Guanajuato, also freeing a kidnapped businesswoman and seizing weapons.

Eight other people were at the two sites, most of them suspected gang members.

The 40-year-old allegedly heads the Santa Rosa de Lima Cartel, which has been engaged in a turf war with other criminal organisations, including the powerful Jalisco New Generation Cartel.

BBC World Service Latin American editor Leonardo Rocha says his capture marks a significant victory for the Mexican government, which has struggled with a surge in violence that even the coronavirus pandemic has failed to contain.

Left-wing President Andrés Manuel López Obrador took power in December 2018 promising to "achieve peace and end the war" in the country, but more than 31,000 people were murdered in 2019 alone and thousands more have disappeared.

He vowed to create a new national guard to tackle violence, however few have signed up to the force.